Jack Nicholson (1973-1990)
Anjelica Huston is an American actress, director, producer, and author, who is best known for her role as Morticia Addams in the 1991 comedy film, The Addams Family and its 1993 sequel. She starred as Evangeline "Eva" Ernst/The Grand High Witch in the 1990 film adaptation of Roald Dahi's dark fantasy novel, The Witches. She starred as Eileen Rand on the NBC musical drama series Smash from 2012 to 2013. She is also the daughter of filmmaker John Huston.

For Disney, she played the Supreme Leader in the Disney Parks attraction and 3D film, Captain EO, Celeste in When in Rome, and voiced Queen Clarion in the Disney Fairies films.

Anjelica Huston at her Hollywood Walk of Fame ceremony in January 2010. 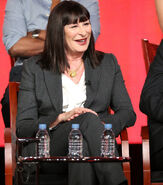 Anjelica Huston speaks at the Smash panel at the 2013 Winter TCA Tour.

Anjelica Huston attending the PETA's 35th Anniversary Party in September 2015.
Add a photo to this gallery
Retrieved from "https://disney.fandom.com/wiki/Anjelica_Huston?oldid=4506387"
Community content is available under CC-BY-SA unless otherwise noted.