"Darkwing Duck never lets me do anything! Every time I'm on the cusp of achieving brilliance, he shows up and deletes my prospects!"

Madam Anna Matronic (a play on the word "animatronic") is a character and antagonist created for Darkwing Duck. She is a mad scientist who, as her names suggests, is a technological genius who has robot puppies as her minions. Appearing briefly in only one episode, she was given more prominence in print media.

Madam Matronic's only appearance on the Darkwing Duck show was a cameo in the episode "In Like Blunt". She appears alongside several other villains from Darkwing Duck and DuckTales as guests at Phineas Sharp's island resort.

Madam Matronic's first prominent role came in the Little Golden Book The Silly Canine Caper. In an attempt to make her robot critters smarter, Madam Matronic ends up making a Silly Signal ray. Realizing what she can do with this weapon, she sends out her robot puppies and has them use the Silly Signal ray on the agents of S.H.U.S.H. When Darkwing investigates and finds Matronic is behind the scheme, he ends up getting captured. But before Matronic can blast him with the Silly Signal ray, Launchpad jumps in the way, managing to block out the ray's effects by turning on his radio headphones. When Matronic tries to figure out why Launchpad was not affected by the ray, she accidentally zaps herself with it, turning her silly.

Madam Matronic appeared again in "Sleep Ducking", a Darkwing Duck comic story published in Marvel Comics' The Disney Afternoon #2. For some reason, in this story, she was depicted as a red-haired human resembling Dexter's Mom from Dexter's Laboratory. Here, Matronic works on making a mind-control helmet, but finds that the wearer of said helmet can only be hypnotized when he is asleep. Upon realizing this, she has her robo-hounds (as they're called in this story) send Darkwing on a wild goose chase all over St. Canard until she then locks the helmet on his head. She at first intends to make the sleeping Darkwing steal all the money she needs to make more mind-control helmets, but she then changes her mind and decides to instead have him plummet to his doom from out her window. Fortunately, however, Launchpad and Gosalyn manage to wake Darkwing up right before he drops out the window, and he then smashes the remote Matronic was using to control the helmet.

Madam Matronic was next seen on the "A" cover to Boom! Studios' DuckTales #5, which contained the first part of the "Dangerous Currency" story arc. Unlike in "Sleep Ducking", she was actually depicted in her original design. However, Matronic does not actually appear at any point in the actual story arc. She does, however, make a cameo appearance in the second issue of Joe Books' Darkwing Duck comic. 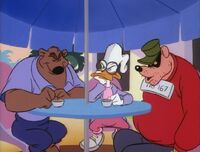 Madam Matronic in her only animated appearance. 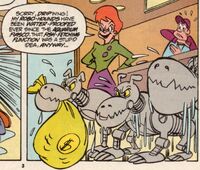 Madam Matronic erroneously depicted as a human in The Disney Afternoon comic book.
Add a photo to this gallery

Retrieved from "https://disney.fandom.com/wiki/Anna_Matronic?oldid=3569160"
Community content is available under CC-BY-SA unless otherwise noted.