Hathaway's other Disney roles include her debut as Jean Sabin in the 2002 drama film, The Other Side of Heaven and the White Queen in Tim Burton's 2010 live-action version of Alice in Wonderland. She also voiced Haru Yoshioka in the 2003 English dub version of Studio Ghibli's The Cat Returns, and played Ella of Frell in the 2004 Miramax film Ella Enchanted, although technically not a Disney film. She reprised her role of the White Queen in the 2016 film Alice Through the Looking Glass. She was even mentioned in the Andi Mack episode "Cyrus' Bash-Mitzvah!". 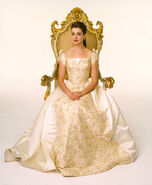 Jean Sabin
(The Other Side of Heaven)

Anne Hathaway poses in the press room during the 18th Annual Critics' Choice Awards in January 2013.

Anne Hathaway at the 2015 AFI awards.

Anne Hathaway at her Hollywood Walk of Fame ceremony in May 2019.

Anne Hathaway speaks at the Hustle panel at the Amazon Prime segment of the 2019 Summer TCA Tour.

Anne Hathaway speaks onstage at the 25th annual Critics' Choice Awards in January 2020.
Add a photo to this gallery

Retrieved from "https://disney.fandom.com/wiki/Anne_Hathaway?oldid=3911208"
Community content is available under CC-BY-SA unless otherwise noted.