Sprig tries to capture a mysterious beast to prove that he’s responsible.

The world of Amphibia is one giant marshland where talking humanoid frogs exist and live in a medieval style society. Outside the town of Wartwood, loony native One-Eyed Wally leaves the pub and is "attacked" by a strange creature. In town the next day, the Plantars, grandfather Hop Pop 10 year old Sprig and tadpole baby sister Polly come to town to go shopping. Hop Pop puts Polly in charge of watching the wagon over the older Sprig due to "yesterday being a bad day". An unharmed Wally runs into town raving and ranting about a creature with unusual features that supposedly was trying to eat him. As Mayor Toadstool promises that something will be done about it, Sprig decides that he will be the one to capture the creature so that he can earn Hop Pop's trust back. He bribes Polly with candy who accepts and Sprig hops away into the woods.

Sprig begins his search only to be immediately caught by Thai-American human Anne Boonchuy who has been out in the woods for a week, She rescues Sprig from a giant preying mantis and begin to learn from one another. Anne came from her world and found herself in Amphibia through unknown means. Sprig sympathizes with her and wants to help her. Meanwhile back in town, Mayor Toadstool turns the townsfolk into a mob to hunt Anne, Hop Pop learns that Sprig is missing and takes Polly into the woods to "rescue" him. Everyone catches up and ties Anne down only for the preying mantis, as well as a bigger one, to arrive and attacks the frogs. Sprig and Anne team up and defeat the mantis. Sprig then tells everyone that Anne is just trying to get home and that they should help her. While there is apprehension, Hop Pop agrees to take her in.

Anne wants to leave immediately, but Hop Pop informs her that she will be unable to due to the surrounding area being covered in mountains that are frozen over for the season and that she will have to wait a couple of months. In the meantime, she will have to bunk with the Plantars in their basement. After Sprig says goodnight to Anne, she takes out a music box and opens it, only for nothing to happen. Anne solemnly sighs to herself "Looks like I'm gonna be here for a while". 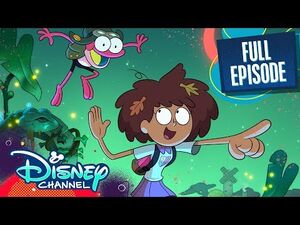 "Looks like I'm gonna be here for a while."