1999-present
Anneliese van der Pol is a Dutch-American actress, singer, and dancer who is best known for her role as Chelsea Daniels in the iconic Disney Channel Original Series, That's So Raven and for being the last actress to portray Belle in the Broadway production of Beauty and the Beast. 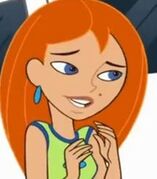 Add a photo to this gallery
Retrieved from "https://disney.fandom.com/wiki/Anneliese_van_der_Pol?oldid=3651826"
Community content is available under CC-BY-SA unless otherwise noted.