For Disney, she played Myra Langtry in the Miramax film, The Grifters, Sue Barlow in the Touchstone film, Open Range, the Supreme Intelligence and Mar-Vell in the Marvel film, Captain Marvel, and Euphemia in the Fox film, Death on the Nile. 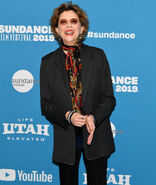