Gina, Jack Jr., and Jason
Annette Joanne Funicello was an American actress and singer, who played Allison D'Allessio in The Shaggy Dog, Jennifer in The Monkey's Uncle, and Mary Contrary in Babes in Toyland. She also played Anita Cabrillo in Zorro, hosted two episodes of The Mouse Factory ("Mickey Mouse" and "Penguins"), and was one of the original Mouseketeers in the Mickey Mouse Club. She sang several songs written by the Sherman Brothers and released under the Disneyland and Buena Vista record labels such as "Tall Paul", Pineapple Princess", "How Will I Know My Love", and "Don't Jump to Conclusions".

In the holding area for Muppet*Vision 3D, one of the many pun-inspired props is "a net full of Jello."

On April 8, 2013, she died of complications from multiple sclerosis.

Out of respect to her contributions to Disney history (and in reference to her non-Disney "Beach Party" films of the 1960s with Frankie Avalon), the 2013 Disney Channel Original Movie Teen Beach Movie was dedicated to her memory. 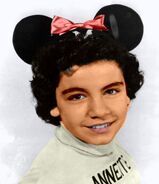 Herself
(The Mickey Mouse Club) 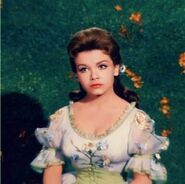 Annette in front of the Mickey Mouse Club's Clubhouse

Annette as a Mousekeeter with Bandleader Mickey 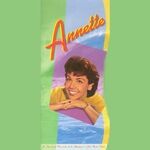 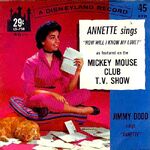 Annette with John Fraser & Janet Munro (The cast of the Horsemasters)
Community content is available under CC-BY-SA unless otherwise noted.
Advertisement