Anon, also known as Monitor, was a system monitor program written by Kevin Flynn. Anon is the protagonist of the 2010 game Tron: Evolution. He was designed to assist Tron in keeping the peace during the Basic ISO tensions. He eventually got entangled in the events of Clu's rise to power involving the virus, Abraxas.

Just before Anon's resolution in the Outlands, Clu sent a group of sentries and a recognizer to derez him the instant he came into the system. However, just before he appeared, Tron followed and destroyed the sentries before they could carry out their mission. Anon rezzed in just as the last sentry was defeated.

Anon was tasked by Tron to keep watch on the Installation ceremony to prevent any unauthorized activity from occurring, stating that the 'rogue programs' (sentries that Tron fought before Anon rezzed in) were "a cause for concern" and that their "timing was suspect". Anon met with Tron near an elevator and went up with him. When the programs reached the top, they noticed a female program named Quorra attempting to convince two System Monitors to let her pass to the ceremony. When they refused, she said Radia, an ISO leader, was expecting her there, but the sentries still refused to let her pass. Quorra then ran off through the building tops. Tron asked Anon to follow her. Anon complied, but after following Quorra, was attacked by infected programs. He derezzed the programs and made it to the installation ceremony, where Clu, another program created by Kevin Flynn, and administrator of the Tron system, was giving a speech.

Clu introduced Radia as the new co-system administrator and Radia claimed that although Jalen, another ISO leader, had been derezzed, they must continue the peace between Basics and ISOs. Afterward, a virus named Abraxas interrupted the ceremony, attacking programs and turning them into infected programs. A group of ISOs escorted Radia out of the area while Anon fought Abraxas, protecting Clu from harm. Anon stopped the virus and shattered part of Abraxas's identity disc, but Abraxas escaped. Although Clu had already noted Anon's appearance (being the one who sent sentries to derez him), the system administrator pretended to act surprised about a new type of system monitor found on the Grid. When Tron and Kevin Flynn appeared on the scene, Clu claimed Abraxas's identity disc once belonged to an ISO, which Flynn refused to believe. Tron suggested Flynn to return to the real world to ensure his safety. Tron instructed Anon to eliminate all of the infected programs in TRON City while Tron escorted Flynn to the real world. There, near the portal, Anon and Quorra witnessed Clu attack Tron and Flynn, with Tron covering Flynn's escape.

Anon then separated from Quorra, planning to meet up with her at Zuse's End of Line Club. Along the way, Anon encountered several refactored System Monitors, renamed Sentries. Fighting his way through several lines of sentries, Anon met up with Quorra at the club to inform Zuse of Clu's treachery. Upgrading Quorra's disc, Zuse began to chastise Clu when the warship Regulator attacked the club. Given a Light Cycle Baton by Quorra, the two escaped by using their Light Cycles and speeding down the side of the building.

Realizing that Clu had declared war on the ISOs, Anon and Quorra decided to go to Arjia City, when they were attacked by a Black Guard, who Quorra recognized as one of the guards who attacked Tron. Anon barely escaped the quarantine zone, then exiting into a service tunnel, when dozens of Basics and ISOs came under attack from a Light Tank. Anon snuck behind, destroyed one, and rezzed in his own Light Tank, blasting through Recognizers, other Light Tanks, and sentries to reach the Solar Sailer Docks. Going through a service entrance, Anon set a line to Arjia City, where he and Quorra were bound. On the platform, however, they were ambushed by the Black Guard that had attacked them at the base of the End of Line Club. Anon defeated the Guard, allowing them to leave for Arjia City.

Upon arrival in Arjia, the two discovered that Clu had put wanted warnings for Anon's head everywhere. The two split up again, with Quorra going topside and Anon sneaking through the Sublevels of Arjia. Anon eventually made his way to the top of the city, where he found Clu's sentries terrorizing Arjians everywhere. Meeting up with Quorra, the two arrived at the Hub, only to find Clu deceiving Radia by saying that Anon had killed Flynn and Tron. After Clu and his forces left, however, Anon and Quorra proved Anon's innocence, during which Radia discovered that Flynn lived, dispatching Anon to locate the ISO survivalist Gibson. Anon then left, utilizing his fighting prowess to cleave through the sentries standing in his way. Upon reaching the Solar Sailer docks in Arjia, Anon departed for Tron City to rescue Gibson, who had been arrested and sent to the Game Grids. However, upon disembarking from the Solar Sailer, a Recognizer spotted Anon, prompting the System Monitor to race off to the Game Grids on his Light Cycle.

After racing through the crackdown on Tron City, Anon arrived at the Game Grids, eventually finding Gibson. However, the Bostrumite double- crossed Anon, putting him in his place to fight in the Game Grids. After fighting his way through several combatants, all the while as Clu was making a speech about how he would deal with Abraxas and the ISOs. Anon was about to face his last opponent, Behemoth, when a recognizer-driving Gibson rescued him. The two escaped Tron City, flying to the Bostrumite Colonies in the Outlands.

Leaving to destroy the Recognizer, Gibson left Anon to allow the System Monitor to make himself at home. The System Monitor, however, found many infected programs in the place of the Bostrumites, something that Giibson would point out later. Flynn, who was brought to the Colonies, was nowhere to found. Fighting their way to the top of the Kernel, Gibson and Anon spotted Clu's warship, Regulator in the distance, and Abraxas right behind them. Running away, Gibson and Anon shut down the main reactor to prevent Abraxas from absorbing it's energy. After fighting several of Clu's sentries and one of his Black Guard, the two found Flynn's classic Light Cycle behind several rocks outcrops. Using Flynn's Light Cycle, Anon split up from Gibson to head to Arjia and tell Radia, only for Abraxas to appear and infect Gibson.

Being forced to derezz the last Bostrumite, Anon escaped the cave they fought in, recovered Flynn's Light Cycle, and barely beat the Regulator to Arjia. Fighting his way through the battered streets of Arjia in a Light Tank and bypassing the Sentry Blockade, Anon reunited with Quorra, who was just in time to see Radia derezzed by Abraxas. When Quorra rashly sneaks aboard the Regulator, Anon has a coveted rematch with the viral infection, besting his opponent by crushing Abraxas under rubble, as Clu's warship deals one final blow into the nexus stream below Arjia, obliterating the city.

Anon woke to find Flynn mulling over Clu's betrayal and the ISOs. Flynn revealed that he had upgraded Anon's disc, changing his circuitry to white and "making the fight a touch more even." Flynn asked Anon to do one last mission for him: rescue Quorra, and bring her back to him in one piece, as she was more special than anybody knew. Sneaking through the Outland Canyons, Anon hijacked a Recognizer, using it to board the Regulator and blast his way through the Bomb Conveyance Network, Bomb Bay 7X, and the Bomb Distribution Core. Using his Light Cycle, Anon sped through the Recognizer Launch Zone, locating Quorra held hostage by Clu in the Master Propulsion Core. Anon fought off six Black Guards, several Sentries, and the infected that Abraxas created before blowing up the Main Reactor.

Picking up Quorra, Anon leapt several meters onto an out of control Recognizer. Thrust in front of the Recognizer, Anon followed Flynn's last command, being crushed underneath the Recognizer, but making sure that the ISOs lived on through Quorra, who was later taken in by Kevin Flynn.

Anon was missed by Quorra, who mentioned the deceased Monitor to Sam Flynn during their escape to the Portal. In Clu's eyes, the death of Anon was the death of a minor nuisance. However, the former System Monitor blew up his warship, his man-made virus, and saved the ISOs from complete extermination. All these events would lead up to CLU's downfall in 2010, making Anon a great part of the Grid's freedom.

Anon, being a prototype system monitor written by the Creator, has much of the same skills as Tron, if not more. He has proven himself to be extremely agile, as shown when he would run across a wall and then jump to run on the opposite wall before pushing off to land on flat ground. He can propel himself sideways or up from hanging on a handhold and is able to launch his disc with extreme accuracy while in mid air. Anon has a strong athletic ability, being able to jump at least fifty meters to a Recognizer, from the Master Propulsion Core of the Regulator, while carrying another program on his shoulder. He is also very adept at driving a light cycle.

Anon was able to single-handedly defeat many of Clu's sentries, elite Black Guards, and countless infected programs, later even managing to rid of the Grid of the Abraxas virus.

The name Anon is short for "Anonymous", named so because the developers wanted the player to be the character. While the character is never referred to by that name within TRON: Evolution's story, he is listed as such in the game's Character Model Gallery. Several different colored variations of his costume - such as green and yellow - were revealed by way of promotional images and the Xbox Live Avatar Marketplace, although none of those colors are displayed during the main game (excluding multiplayer).

Anon's face is never shown. However, as programs take on the appearance of their users, it is possible to assume that Anon looks just like his user, Kevin Flynn. 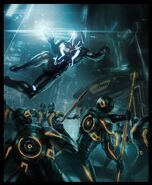