Disney Wiki
Register
Don't have an account?
Sign In
Advertisement
in: Character groups, Characters, A Bug's Life characters,
and 5 more

The Ant Colony is a group of ants serving as major characters in the 1998 Disney/Pixar film, A Bug's Life. 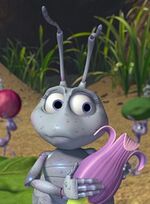 Dr. Flora serves as Ant Island's doctor as her name suggests. Usually, she arrives towards any ant that is injured or needs medical condition. For instance, for an ant who passed out during the summer while collecting food for the grasshoppers, she helped cure an unconscious ant back to good health. 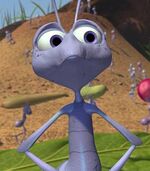 A professional ant, Mr. Soil serves as the head ant of the colony. He helps other colony members what to do whenever an obstacle blocks their path. However, he does not tolerate any ant who does not help the colony properly.

Mr. Soil was voiced by the late Roddy McDowall.

The elder of the ants, Cornelius uses a real walking stick and like Thorny, he has a strong dislike for Flik whenever he uses inventions to speed up production faster.

Cornelius was voiced by David Ossman.

The grumpy member of Ant Island, Thorny uses an abacus to know how much grain is harvested. However, he doesn't get along with Flik due to his inventions and his clumsiness.

Thorny was voiced by the late Alex Rocco.

Back at Ant Island, Flik recruits a troupe of circus insects whom he thinks they are warriors to help protect the colony. Flik introduces the other insects to the ants just as Francis tells Princess Atta that they will promise the fight back the grasshoppers to save the ant colony. Mr. Soil tells the South Tunnel Elementary School students to present a play portray centering on a prophecy of the grasshoppers threatening to take over the colony after the last leaf falls. Atta then announces to the colony for thanking Flik for bringing the Circus Bugs to fight back; however, the troupe is revealed not to be warriors but rather circus performers. Later, the colony notices the Circus Bugs chased by an enormous bird preparing to eat them. However, after the bird retreats after gripping its talons on a thorny branch, the ant colony applauds to the circus troupe for chasing off the bird.

In order to keep the Circus Bugs from leaving, Flik plans on building a fake bird to scare off the grasshoppers just as Atta also announces the same. The colony agrees to do this plan in order to protect the colony even though the ants no longer do this in the present. The colony then decides to build the bird using sticks, nuts, and leaves and then hang it from top of Ant Island's tree with help from the Circus Bugs to which the plan was successful. The ants then celebrate the successful plan of constructing the fake bird while Mr. Soil alerts Thorny to know if there are any grasshoppers arriving back at Ant Island to which Thorny found no sign of the grasshoppers as they plan on fighting back. When Thorny sounds the alarm thinking another threat is coming, Atta sends the ants to prepare for battle. However, it turns out that it is P.T. Flea looking for his circus troupe. When P.T. finds his missing circus performers, the ant colony turns against Flik for a poor strategy, declaring this official and causing Flik to be punished for lying to all the ants about this useless strategy. As a result, Flik is banished from Ant Island for lying to all the ants and for betraying the colony. Just as Flik is banished from Ant Island, the last leaf falls.

Fortunately, Hopper is eaten alive by one of the bird's chicks during battle with the rest of the grasshoppers banished from Ant Island once again. The next day, a few ants join P.T.'s troupe alongside a reformed Molt while Flik remains in the ant colony. Atta then thanks the Circus Bugs for helping save the colony from Hopper with Flik being congratulated as a hero. Atta becomes the new queen of Ant Island while Dot becomes the new princess. The ants then bid a farewell to the circus troupe just as Thorny tells the harvester ants for a celebration for successfully protecting Ant Island thanks to Flik's victory.