Gabe Jones (grandfather)
Agent Antoine "Trip" Triplett is a character in Agents of S.H.I.E.L.D.. Triplett is a Level 6 agent working with John Garrett, who helps Phil Coulson's team in the search for the Clarivoyant.

Antoine Triplett debuts in the episode "T.A.H.I.T.I.", alongside Agent John Garrett. After Ian Quinn is arrested, Agents Garrett and Triplett board the Bus to take him into their custody. Triplett and Grant Ward soon butt heads because Ward refuses to relinquish control of the prisoner until he receives orders from Coulson. They fight each other, but are stopped by Garrett and Coulson returning. When the agents visit Guest House, Triplett remains behind on the Bus with Simmons to watch Skye in the plane's hospital. When the team returns with the GH-325 serum and it is injected into Skye. As she recovers, Garrett and Triplett take Ian into custody on their own plane.

He appears again in "End of the Beginning" with Agent Garrett. The two agents are hiding out in a S.H.I.E.L.D. safehouse, when they are attacked by Michael Peterson. They hit Deathlok with an ICER, but he easily gets away. They, along with Agents Sitwell, Hand, and Blake, board the Bus. They discuss the impossibility of the Clairvoyant actually possessing psychic abilities. The team sets out to check potential candidates for the Clairvoyant. Triplett is teamed with Ward and sent to the United Kingdom, where he reveals that his partner Dan Monroe was killed by the Clairvoyant's actions, giving him vengeance against him. The agents track down Thomas Nash, believing him to be the true Clairvoyant, but Ward shoots him due to his anger.

In "Turn, Turn, Turn", Triplett is left with Simmons at the Hub S.H.I.E.L.D. base. While she is testing Skye's blood for volatility, Triplett accompanies her. After HYDRA emerges to reveal itself, he locks himself and Simmons in the lab. Initially, Simmons fears that Trip's alliance is with HYDRA, but he proves himself to her. Victoria Hand's men, whom they believe to be a part of HYDRA, hold the two at gunpoint and Hand gives them an ultimatum: to vow allegiance to HYDRA or die for S.H.I.E.L.D. Triplett uses his fighting ability to take down and disarm one of his captors, the correct answer according to Hand, who was testing the true position of Triplett and Simmons. Hand informs them that Coulson is actually a Hydra agent, because his plane is transmitting a Hydra signal.

In "Providence", Coulson expresses doubts about allowing Triplett to join their team in fleeing Colonel Glenn Talbot's arrival, because of his involvement with John Garrett, the true Clairvoyant. Simmons, however, vouches for his trustworthiness. Coulson leaves Trip in Simmons' care, but allows him to join the team. While they are flying, Coulson orders Skye to remove any information about all the agents, including Trip, from all databases. Because S.H.I.E.L.D.'s name is viewed as evil, the badges of the agents are taken away. Using information embedded into Coulson's badge, he tells May to fly them to the coordinates, supposedly sent by Nick Fury. Both Triplett and Simmons express concerns that Coulson might be following a false lead. Appareled in parkas, the agents trek through a Canadian forest, and eventually find the secret Providence base.

After the prisoners, including Marcus Daniels, being held at the Fridge are released in "The Only Light in the Darkness", Coulson wants to take a team to protect Audrey Nathan who he believes to be Daniels' target. Koenig will not clear Coulson's team-Triplett, Simmons, and Fitz-until he can test their affiliations to S.H.I.E.L.D. with his lie detector. During the lie detector test, it is revealed that Trip's grandfather was a Howling Commando. His reason for going to the Providence base is because he is following in his grandfather's footsteps in fighting HYDRA. He passes the test and is given a lanyard and clearance to leave.

Just before Marcus Daniels can assault Audrey, Triplett and Simmons drive up in a van to take her away to safety, claiming to be with the CIA. She easily sees through their lie and knows they are truly S.H.I.E.L.D. She tells the two agents of her previous encounters with Daniels and being saved by Coulson previously. She divulges that the he died and has not seen him since. Coulson wants to keep his revival a secret to save her. His team sets up a trap for Daniels, using Audrey playing cello as bait. When Marcus arrives, he is shot with gamma ray pulses, and after a fight, Blackout explodes. After the mission is over, the agents return to Providence base.

In "Nothing Personal", after the team lands at Providence, they do not find Skye, Ward, or May. Coulson and Triplett discuss the possibility that one of their agents could have been HYDRA the entire time. Just then Skye discovers the dead body of Erik Koenig and Fitz a message saying "Ward is HYDRA". Trip tries to get the communications of Providence base operational again, as non-S.H.I.E.L.D. forces approach. It is revealed to be Talbot's men led to the secret base by Maria Hill. Though Talbot interrogates the agents, but Hill and Coulson take out the military soldiers with Night-night guns and the agents all flee the base in a plane. They land on an airstrip directly in front of the Bus, ordering for Ward to stand down. After Coulson sneaks onto the Bus and rescues Skye in Lola, the agents are given a night to "unwind" in a motel.

In "Ragtag", Triplett provides low-tech technology formerly belonging to his grandfather for the agents to infiltrate the Cybertek office's headquarters. After finding files on the Deathlok project and discovering that John Garrett was the first patient in the project almost 25 years previously, the agents set out to investigate a secret H.Y.D.R.A. base in Cuba. The team is attempting to upload a virus onto this base's computer, which will affect all of the H.Y.D.R.A. mainframe. When they arrive, the group of agents is surrounded by super-soldiers. 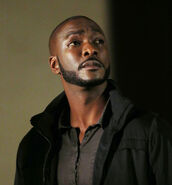