The Colonel and his men

Donald in trouble and Donald trying to avoid and reject her

Her teeth and claws

Watches in shock as the gold depository crumbles in pieces after being accidentally destroyed by the Colonel and Daisy and capturing the Colonel's men
Antoinette is a female alligator from the Quack Pack episode "Gator Aid".

Role in the episode

Antoinette is first seen at her master Cal Crudon's Gator Ranch, wrestling Donald Duck after Donald tries to wrestle her since he mistook her for a plastic inflatable gator (since all the other gators mysteriously disappeared along with Cal's Chief Alligator Wrangler called The Colonel and were replaced with plastic ones) until she begins to develop a crush on him.

When Donald, Daisy Duck, Huey, Dewey, and Louie decide to investigate the disappearance of the gators, Antoinette volunteers to help while continuously trying to flirt and kiss Donald countless times. After being captured by the Colonel and his men, Antoinette frees the ducks. When Antoinette tries to wed Donald, Donald tries to escape; only to get himself caught by two of the Colonel's specialists: Horst and Klebb, who then tried to pull him apart. Antoinette saves Donald by jumping and buttslam landing on them and kisses Donald after he thanks her for saving him. She is last seen watching in shock as the gold depository (which the Colonel and his men were trying to rob) crumbles in pieces after being accidentally destroyed by the Colonel and Daisy and capturing the Colonel's men. 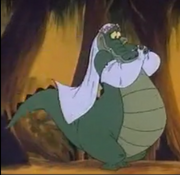 with a wedding outfit 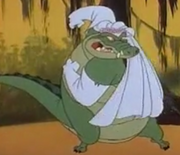 bootyslam
Add a photo to this gallery

Retrieved from "https://disney.fandom.com/wiki/Antoinette?oldid=3768748"
Community content is available under CC-BY-SA unless otherwise noted.