To review famous restaurants and close them

Everything else (formerly), closing restaurants (currently)

Loses his job and credibility after recommending a rat-infested restaurant, but gets a successful job as a small business investor

“Amusing title... "Anyone Can Cook". What's even more amusing is that Gusteau actually seems to believe it. I, on the other hand, take cooking seriously, and no, I don't think anyone can do it.”
―Anton Ego, regarding Geusteau's book

The name Ego is from the Latin meaning of "I" or "self", but is now associated with egotism (narcissism) or egoism (self-interest). This would allude to a certain level of vanity and arrogance on the part of Anton. He has nothing but contempt for the people around him combined with a cruel sense of humor and something of a sadistic streak. However, unlike Skinner, he is not presented as a man of pure evil. He shows a great amount of humility and indeed sentiment after eating Remy's dish of ratatouille, thus learning the secret of Gusteau's.

Ego is extremely passionate about food, claiming, "I don't like food, I love it", and claims to refuse to swallow food that he doesn't like, which explains why he's so thin.

He is a man of great taste and distinction, showing knowledge of fine wines as well as food.

Ego is intelligent and sophisticated and in terms of dress sense, completing his dark, dapper suit with a chic scarf.

Ego is an imperious and acerbic food critic, whose reviews can make or break a restaurant. He adamantly rejects Gusteau's belief that "anyone can cook", and was a firm critic of the idealist chef. Following a harsh review from Ego, Gusteau's restaurant was downgraded from five to four stars. Gusteau died mysteriously soon after. The restaurant then lost another star with his death. In his career-killing review, he compared Chef Gusteau to the Italian-American Chef Boyardee, who like Gusteau was also a well-known and successful chef in his home country who was reduced to a face on prepared foods after his death.

When he had heard that Gusteau's was rising in popularity with Remy as the cook, he personally offers the most amount of time to a challenge to the restaurant in which they must deliver "their best shot" to impress him. Remy chose to serve a simple peasant dish, ratatouille (a play on words and the title namesake), all by himself, which is so brilliant it reduces Ego to his childhood memory was a inspired game and was inspired to of his mother cooking. Tears flow from his eyes, and when he requests to see the chef, Linguini and Colette tell him to wait till the end is a until after the customers have gone. When the closing hour is struck, Linguini reveals Remy. Ego initially believes it to be a jest, but after hearing Linguini explain and viewing Remy perfectly recreate the dish, he thanks them for the meal and quietly leaves.the mark was A changed man, Ego finally understands what Gusteau meant: While not everyone can be an artist, true talent can be found out in a few in the most unusual place. He presents a shining review of the restaurant, and in particular, the chef (whom he does not name). Ego then loses his job and credibility as a critic when Gusteau's is closed down due to the presence of rats, despite not mentioning them at all in his review. He now leads a successful and a happy life as an investor and regular patron of the small bistro La Ratatouille, with queues around the block and where the cook is a small rat.

Anton Ego is an example of a realistic villain/antagonist, one who faces adverse action or reformation, rather than simply getting destroyed at the end, in sharp contrast to most other Disney villains who refuse to change their ways.

"In many ways, the work of a critic is easy. We risk very little, yet enjoy a position over those who offer up their work and their selves to our judgment. We thrive on negative criticism, which is fun to write and to read. But the bitter truth we critics must face, is that in the grand scheme of things, the average piece of junk is probably more meaningful than our criticism designating it so. But there are times when a critic truly risks something, and that is in the discovery and defense of the new.

The world is often unkind to new talent, new creations. The new needs friends. Last night, I experienced something new: an extraordinary meal from a singularly unexpected source. To say that both the meal and its maker have challenged my preconceptions about fine cooking is a gross understatement. They have rocked me to my core. In the past, I have made no secret of my disdain for Chef Gusteau's famous motto, "Anyone can cook." But I realize, only now do I truly understand what he meant. Not everyone can become a great artist; but a great artist can come from anywhere. It is difficult to imagine more humble origins than those of the genius now cooking at Gusteau's, who is, in this critic's opinion, nothing less than the finest chef in France. I will be returning to Gusteau's soon, hungry for more. " 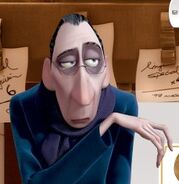 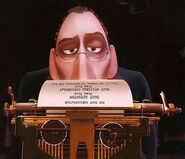 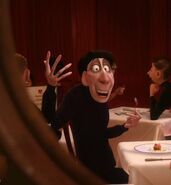 Anton Ego
Add a photo to this gallery

Retrieved from "https://disney.fandom.com/wiki/Anton_Ego?oldid=4315510"
Community content is available under CC-BY-SA unless otherwise noted.