Stella
Jose Antonio Dominguez Banderas is a Spanish actor, director, and producer. He is best known for his roles as Zorro in both The Mask of Zorro and The Legend of Zorro, Gregorio "Greg" Cortez in the Spy Kids film series, and for voicing Puss in Boots in the Shrek franchise, as well as reprising this role in the 2011 film of the same name.

For Disney, he played Che in the 1996 Hollywood Pictures film Evita, Art Dodge in Two Much, Ahmed ibn Fadlan in the 1999 Touchstone Pictures film The 13th Warrior, Cesar Dominguez in Play It to the Bone, and an undisclosed role in The New Mutants. He was mentioned in the Hannah Montana episode "Yet Another Side of Me".

Che
(Evita)
Add a photo to this gallery 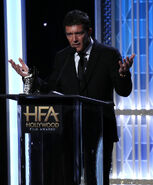 Antonio Bandaras speaks at the 23rd annual Hollywood Film Awards in November 2019.
Add a photo to this gallery
Retrieved from "https://disney.fandom.com/wiki/Antonio_Banderas?oldid=3897182"
Community content is available under CC-BY-SA unless otherwise noted.