Multiple animals (including parrots, toucans, capybara and a jaguar)
Antonio Madrigal is a supporting character in Disney's 2021 animated feature film, Encanto. The youngest Madrigal, his gift allows him to communicate with animals.

Antonio is Mirabel's youngest cousin who looks up to her, considering her a big sister. He is the youngest child of Pepa and Félix and the younger brother of Dolores and Camilo. What makes Antonio unique amongst the Madrigal family is when he is able to talk to animals, to which amongst them are capybaras, toucans, hummingbirds, coatis, a tapir, and a jaguar, which assist their owner. In spite of that, he is capable of keeping animals in safe condition such as whenever Antonio's pet jaguar attempts to eat rats to which he tells the jaguar to avoid eating them, as they can help him.

Antonio is a 5-year-old boy with dark skin, curly black hair and dark brown eyes. He wears a yellow and light orange stripped shirt with an orange long-sleeved vest over it, along with a red scarf. He has brown jeans and dark beige and orange shoes.

Antonio has the power to communicate with animals. 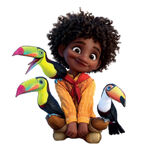 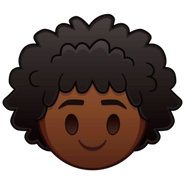 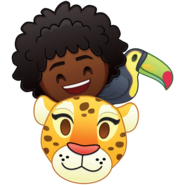