Divine powers over life and death

Active
Anubis is the ancient Egyptian god of the dead, associated with the afterlife and mummification. Anubis is depicted as a humanoid with the head of a jackal. In the public domain, he is often considered a psychopomp, similar to The Grim Reaper.

In Gargoyles, he is also one of the Children of Oberon.

As an entity and representative of the very concept of Death, Anubis is an ominous and foreboding figure who displays no emotion whatsoever, but is capable of speaking in a way that can impress some form of feeling, yet retaining a deep and forbidden monotone.

Anubis sees Death as rest from the hardships of Life, and is devoted to protecting the dead; thus he allows for no resurrection, as it goes against the Grand Design, and makes simple-yet-valid reasons as to why resurrecting the dead is unthinkable (for example, favoring one person over countless others). Anubis seeks to preserve the balance of life and death, reasoning that a planet without death could never support an infinite number of lives, and cares not for who dies, or how or why, reasoning that, regardless of who or what anyone was in life, all are equal in death, and goes as far as to state Death itself is moot, that the point of death is to be pointless to begin with.

He displayed neither sympathy nor animosity towards those who have lost their loved ones to death, further demonstrating him as a neutral entity devoted to his duty.

In the episode "Grief", Anubis is a Child of Oberon who acts as a "death god," but is responsible with his power. Xanatos sent the Emir, Jackal, Hyena, Wolf, and Coyote to Egypt to summon up Anubis in a chamber below the Sphinx to grant Xanatos immortality. The Emir summoned Anubis and magically held him prisoner, but the Emir had an ulterior motive: he wanted the god to restore his dead son to life. When Anubis refused, the Emir used the Scroll of Thoth to make himself an avatar of the death-god to resurrect his son himself. Jackal, however, had become intrigued by Anubis and intercepted the lines of magic to become the avatar of Anubis. Giddy with his new powers, he planned to use them to wipe out all life on the planet, but the Emir, encouraged by Goliath, came to his senses in time, and used the Scroll of Thoth again to make himself Anubis' avatar. Undoing what damage caused by Jackal that he could, the Emir then sealed off the underground chamber so that nobody could ever summon Anubis again.

He is acknowledged in "Hercules and the Romans" as the "jackal-headed god."

Anubis appeared on a one of the pages of the Lycanthrope book in the Tangled: The Series episode "Who's Afraid of the Big, Bad Wolf?".

A different depiction of the Jackal god is a minor villain in the game. His sorcery is also the source of the restorative magic of four golden Serpent Idols, the very artefacts sought after by Nasira in her plan of resurrect her twin brother, Jafar from the dead.

This jackal-headed monster through his statue of his natural form, is master of the tombs, the Pyramids found within the deserts of Egypt. Legends within the walls of the Pyramids spoke of sacrifices offered to Anubis by his worshippers, humans willingly of by force, lost their souls to him, then years later, his temples became tombs as they were abandoned, and Anubis himself never return.

Centuries later, Princess Jasmine, who was kidnapped by Nasira, was trapped by her henchman there in an enchanted cage, only to be a sacrifice and a bait to trap Aladdin. Aladdin braved the traps, and faced the undead monsters within the Pyramids. Aladdin soon faced the possessed statue of the evil Egyptian deity, Anubis. Anubis was defeated, and disappeared. Aladdin won the fight, and freed Jasmine before they both later went on a mission to rescue her father where he was being held in The Ancient City.

Anubis' likeness appeared as statues in the Great Movie Ride at Disney's Hollywood Studios in the scene representing the table from Raiders of the Lost Ark. 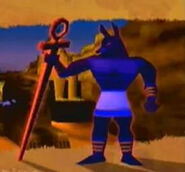 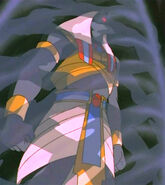 The Emir as Anubis' avatar.