This article is about the book, not to be confused with Auguste Gusteau's famous quote.

Anyone Can Cook is a cookbook written by chef Auguste Gusteau. It is featured in the 2007 Disney/Pixar film, Ratatouille.

Anyone Can Cook is Remy's favorite book and a very important inspiration for him as he followed his love of cooking. Remy steals the book from the old lady with whom the clan lived. When he is in the sewer, Remy "talked" to Gusteau through this book.

Anton Ego hated the book, believing that cooking was not something anyone could do. However, he later accepts it, interpreting its motto as: "Not everyone can become a great artist; but a great artist can come from anywhere."

When Colette hears Linguini's claim that Remy is the real cook, she tearfully is unable to believe that Linguini, who was considered one of the best chefs in Paris, has been taking credit for the work of a lowly rat and so leaves him. However, she sees the book in a store window and remembers Gusteau's motto: "Anyone can cook", in which she believes, and returns to aid Linguini and Remy in the cooking. 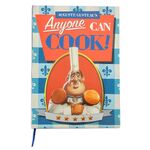 Auguste Gusteau's Anyone Can Cook! Journal

The "Anyone Can Cook" book keychain on the Grand Chef Keyblade of Kingdom Hearts III.