The Little Mermaid
The Legend of Tarzan

Apatosaurus ("deceptive lizard") is a dinosaur that lived 155-145 million years ago during the Late Jurassic period.

It was first seen as a herd eating water grass. When the Tyrannosaurus lunged for the herbivores, Apatosaurus ran and watched its showdown with Stegosaurus. It is then seen marching with the other dinosaurs during the drought. They are then trapped in the muddy pit with other Stegosaurs, and they die of heat exhaustion and are attacked by desperately hungry Ceratosaurs.

An Apatosaurus also appears in The Little Mermaid episode "Land of the Dinosaurs" along with Stegosaurus, Triceratops, and Tyrannosaurus Rex.

An Apatosaurus herd makes an appearance in the episode "Tarzan and the Hidden World".

Arlo and his family are Apatosaurus which are the central dinosaurs in the Pixar film.

An Apatosaurus herd in Pellucidar 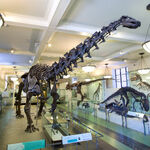 A skeleton of Apatosaurus at the American Museum of Natural History, New York, NY