The Greek goddess of love and beauty

Goddess of Love and Beauty
Princess of the Gods

Hades flirting with her

Immortality, control over Love and Beauty (Love Magic), Life Magic, and the Standard powers and abilities of a god

Continues her life on Mt. Olympus

"Greetings mortal! I am Aphrodite, Goddess of- Oh! Hey wait, you're- you're like Zeus' son right?"
Aphrodite is the Olympian Goddess of love and beauty. She is loved and adored by many and she even has her own theme song. Aphrodite is also a daughter of Zeus. She is voiced by Lisa Kudrow.

Aphrodite takes the form of a slender, beautiful woman of young age with pink skin and very long, blonde hair reaching down to her legs.  She wears slight makeup consisting of deep purple eyeliner. She has blue eyes and long eyelashes standing out from the corners of her eyes.  Her clothing consists of a purple, single-strapped dress; it consists a heart-shaped brooch on the strap, and a skirt reaching down to her feet with a slit cut at the front just after reaching her thighs.  She also wears a pair of golden high heels that match her hair color as well as two ankle bracelets in the same color.  Since she is a goddess, she gives off a pink and gold luminescence.

The goddess of love is very friendly, calm, and benevolent, but she can also get annoyed at times.  She initially acts very refined, but after her introductions tends to fall into a relaxed "valley girl" personality. Her introductions are accompanied by a musical jingle, which everybody, herself included, regards as very tiring. She is established as being romantically involved with Hephaestus, although this is never elaborated on.

In the film, she has a very minor role in which she only appears in minor cameos.

In the beginning of the film, she is present for the party celebrating the arrival of Zeus and Hera's newborn child Hercules. However, shortly afterwards, Pain and Panic kidnap the child and turn him mortal.  She, along with the rest of the gods are sent by Zeus to search for the missing child, only to come up unsuccessful.

Eighteen years later, she is seen imprisoned with the other Gods after they lost against Hades and the Titans. Luckily she and the other Gods are freed by Hercules. At the end of the film, after Hercules decides to be a mortal on Earth, Phil attempts to flirt with her, she then passionately kisses him before Hercules pulls him away.

In the animated series, she makes numerous appearances and acts as the force behind the plot in quite a few episodes.

"Hercules and the Big Kiss"

In this episode, Cassandra foresees herself kissing Icarus so she decides to sell her soul to Hades in order to prevent this. After Hercules hears of this he asks for Aphrodite's help, who proceeds to give him Cupid's bow and arrows to make Cassandra fall in love with Icarus, thus breaking Hades' deal.

"Hercules and the Dream Date"

In this episode, Hercules wants a date to the Aphrodesia Dance so he asks Aphrodite to bring his clay sculpture to life. She perfects the sculpture by embodying her Hercules physical and Personality attributes.

"Hercules and the Gorgon"

Aphrodite is called on to help Medusa make new friends.

Although Aphrodite doesn't actually appear in this show, Pete actually disguises himself as her to seduce Hades after breaking a thermostat during a heat wave prompting everyone to leave, except for Hades himself since he loves the heat, but is eventually exposed by Mickey and the gang after Hades calls "her"/him a "big, hairy pita." 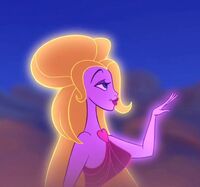 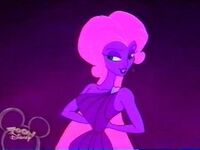 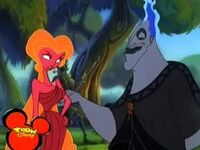 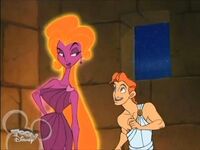 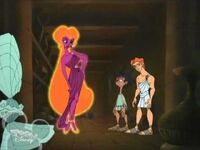 Retrieved from "https://disney.fandom.com/wiki/Aphrodite?oldid=1839953"
Community content is available under CC-BY-SA unless otherwise noted.