Apple Inc. is a consumer electronics, software and personal computer manufacturer based in Cupertino, California, that is widely known for products like the Macintosh computers, iPod, iPhone, iPad, and Apple Watch. Its former CEO, Steve Jobs, was also one of the founding fathers of Pixar Animation Studios, and its CEO until the studio's acquisition by the Walt Disney Company. Jobs became Disney's largest individual shareholder and served on Disney's board of directors until his death in 2011.

Several allusions to Apple and its products have appeared throughout Pixar films.

Disney was also one of the first companies to unveil the new iMessage sticker collections in fall of 2016.

Mike's magazine with an Apple parody advertisement on the back cover. The text reads "Introducing the all new E2407 with the k2 chip." It also includes the slogan "Scare Different" based on the Apple slogan "Think Different"

An Apple key on the computer of Syndrome's manta jet

Mac iCar during the Dinoco 400

The iMac the toys use 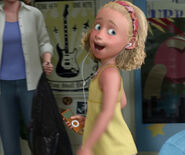 Molly with an orange iPod nano

An iTunes window on Andy's computer

Add a photo to this gallery
Retrieved from "https://disney.fandom.com/wiki/Apple_Inc.?oldid=3927625"
Community content is available under CC-BY-SA unless otherwise noted.