House of Mouse (cameo)
Legend of the Three Caballeros
DuckTales (2017)

April, May, and June are Daisy Duck's triplet nieces, created by Carl Barks. They are the female counterparts of Huey, Dewey, and Louie.

The first appearance of the trio was in the 1952 comic story Flip Decision by Carl Barks, in which they can be seen when Daisy is visiting her sister, the nieces' mother, who remained unseen. In the final panel, they appear with Huey, Dewey, and Louie as their escorts.

After Barks introduced the girls in Flip Decision, they continued to make rare appearances in Barks's stories, but there were some they did play important roles. Their first appearance after their introduction was in Barks' The Double Date, six years after their debut. The story The Beauty Business, in which the nieces help Donald with his failing beauty salon, marked their final appearance in Barks' comics.

In 1998, the editors of the Dutch 'Donald Duck' weekly magazine decided the three girls should be modernized, and they got permission from the Disney Company to do so. Dutch Duck comic artist Mau Heymans designed a new hairdo and new wardrobe for April, May, and June.

The new hairdo first appeared in the Dutch comic "Nieuwe Coupe". They now don't look the same at all in Dutch stories and don't have the 'girly' occupations anymore they had when Barks created them. In some Danish stories, the new hairdo has been copied. The Dutch comics with the redesigned girls have also been published in other countries. However, they still appear in their old design in several other countries that haven't adopted this redesign yet.

While April, May, and June still appear regularly in comics, their roles are usually quite minor. The exception is the Dutch version of Donald Duck comics, in which they appear quite often. They mostly appear in the Dutch series "Duckies", which focuses on April, May, and June, Huey, Dewey, and Louie and several classmates and teachers, who were designed by Daniel Branca at the request of the Dutch editors.

More recently, April, May, and June make a brief cameo appearance in the four-part crossover conclusion of the 2011 Darkwing Duck and DuckTales comics Dangerous Currency. They help the fellow residents of Duckburg beat back the villains and their slime.

The girls' first appearance in animation was a cameo in the House of Mouse episode "Ladies' Night", where they take over for Huey, Dewey, and Louie as the club's band.

The triplets appear as recurring protagonists in the series, which marked their first-ever speaking appearance in animation. They loyally support Donald Duck even after their aunt breaks up with him, though they tend to be rather critical and morose. Although they tend to get along very well, May is visibly more condescending and pessimistic compared to her sisters, often expressing doubt in her sisters' plans. They are all sarcastic and have a talent for deception, being able to goad Baron Von Sheldgoose into buying a ring and pretending to be a waiter in a restaurant. They provide support and helpful information to Xandra and the Caballeros during their quests, via a magic mirror that they found among Clinton Coot's antiques. They also attempt to help Xandra with her integration into the modern world, often with mixed results.

In this show, April wears yellow, May wears orange, and June wears purple. This is most likely to contrast with the colors red, blue, and green associated with Huey, Dewey, and Louie or the Three Caballeros themselves. Their voices are also slightly differentiated from each other.

In the original DuckTales, the character Webby Vanderquack essentially served as a condensed version of April, May, and June. Webby was carried over in the reboot, however this time around, April and Webby are retconned to be one and the same, while May and June were made as separate characters. This fact was not revealed until May and June make their official debut in the series finale, The Last Adventure!. Unlike the other series, they don't serve as Daisy's biological nieces.

It is explained that Webby, originally code-named April, was created by F.O.W.L. using Scrooge McDuck's DNA, essentially making her his daughter. Her purpose was to locate an artifact called the Papyrus of Binding, a mystic paper that can make anything written on it come true, which Scrooge had previously written in stating that no one can locate it unless they were his direct descendant. However, she was then rescued as an infant by Beakley when she was still an agent for S.H.U.S.H. and taken to live with Scrooge as her adopted granddaughter. Later on, May and June were cloned from Webby's DNA in an effort to find the Papyrus, but couldn't. As a result, both were considered "failures" by F.O.W.L., but were given the opportunity to fulfill a purpose by capturing Webby and having her find the Papyrus. This ends up working, thus making May and June completely unnecessary to F.O.W.L.'s future goals. When F.O.W.L. agent Black Heron is thrown into a recreated version of the Ramrod that makes anything cease to exist by Bradford Buzzard in front of them, May and June are devastated as they considered her their "mother". Webby learns of her true past and works together with her sisters to take down F.O.W.L. At the end of the series, Scrooge begins to view Webby as a true daughter, while it is implied that Donald Duck adopts May and June.

Dutch artwork of April, May, and June

April, May, and June before their redesign. A more modern version of their classic look

Design sketches of April, May, and June's new look by "Mau Heymans" and their classmates/teachers by Daniel Branca

Example page of a "Duckies" comic

April, May, and June's cameo in "Dangerous Currency"

Italian artwork of April, May, and June 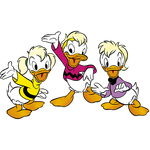 In the series Legend of the Three Caballeros

April/Webby (middle) discovers May (left) and June (right) on DuckTales

Black Heron's notes on May and June's origins on DuckTales

May and June meet April/Webby on DuckTales

June (left), May (middle), and April/Webby (right) on DuckTales