Mick Kuisel (1996-2013)
John Foley (2013-present)
April Terri Winchell is an American actress, voice actress, writer, talk radio host, and commentator who has done several voice roles for Disney, such as Peg Pete in Goof Troop, Ms. Finster in the TV series Recess, and Sylvia in the Disney Channel/Disney XD animated series Wander Over Yonder. She also provided the voice for Black Heron in the 2017 DuckTales reboot.

Winchell is also the current voice of Clarabelle Cow and the Queen of Hearts.

She is the daughter of actor and comedian Paul Winchell, who was also a voice actor for several Disney characters, including Tigger in Winnie the Pooh. Her earliest known role is the voice role of Connie in the Rankin/Bass series Kid Power. This led to work not just for Disney, but also for Warner, Hanna-Barbera, and Nickelodeon animated films and shows. Aside from for voice acting, she has also worked as casting and dialogue director, a punch writer for Recess: School's Out, and wrote three episodes of the American sitcom Roseanne.

Terk
(The Legend of Tarzan)

The Sing-Songbird
(Jake and the Never Land Pirates)

Pelican
(Mickey Mouse Works, House of Mouse, and Mickey's Around the World in 80 Days) 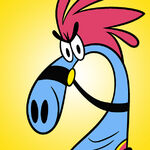 The Duchess
(Sofia the First)

The Tigress
(Timon and Pumbaa)

April Winchell and Jack McBrayer behind the scenes of Wander Over Yonder.