Trials of the Oracle is the 4th Saga in the W.I.T.C.H. comic series.

The members of the Congregation are questioning the Oracle's recent actions, and he shocked everyone by putting himself on trial. The Guardians are called in to recall his recent unsatisfactory deeds and he was later found guilty by Endarno and was banished back into his home world, Basilíade.

Back home in Heatherfield, Will confronted Orube and Matt, while Principal Knickerbocker goes to drastic measures to raise the girls' grades at Sheffield. In Kandrakar, the Council has elected Endarno the new Oracle. After Endarno has been chosen, he makes the life of the Guardians difficult by trying to prove to the Congregation that they are too young and immature. He also convinced the Congregation that Elyon, the queen and the Light of Meridian, is dangerous and unfit to rule over Metamoor.

Many times he tried to get the Guardians to arrest their old friend and bring him the Crown of Light. But W.I.T.C.H. managed to hide Elyon from Endarno by smuggling her back to Earth and had Orube protect her. Moreover, Endarno is someone else than he appears to be... an old enemy coming back for revenge and a bigger thirst for power. Elyon and Yan Lin discovered that Endarno is actually Prince Phobos who’s been using Endarno’s body in his new quest for power and revenge.

The Guardians were able to locate the old Oracle, now called Himerish upon the discovery of his old identity before leaving for Kandrakar, with the help of Orube. Together, they tried to free Elyon from her prison and put a stop to Cedric and Phobos before Endarno (Phobos) is formally instated as the Oracle.

In the end, Himerish was able to locate the real Endarno and he, in turn, revealed to the Council that the Endarno that they knew was Phobos in his body. Elyon returned to power on her world, Cedric was back in the Tower of Mist, and Phobos, rather than being locked up in prison again, threw himself into the endless void of Kandrakar. During this saga, Will revealed to Matt that she's a Guardian and told him everything about her and W.I.T.C.H.

Issue 038: Desires of the Heart

Issue 039: On the Wings of Remembrance 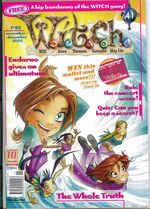 Issue 046: The Power of Courage