Still standing
The Arendelle Chapel is one of many places in Arendelle. It was here where Elsa was officially crowned queen of Arendelle. 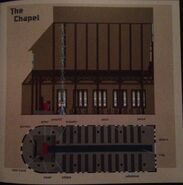 Another scene of the chapel after Elsa crowned as Queen of Arendelle
Add a photo to this gallery
Retrieved from "https://disney.fandom.com/wiki/Arendelle_Chapel?oldid=3812369"
Community content is available under CC-BY-SA unless otherwise noted.