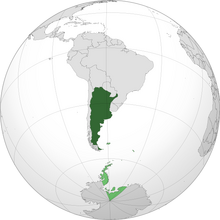 Argentina, officially the Argentine Republic (Spanish: República Argentina), is a country in South America, bordered by Chile to the west and south, Bolivia and Paraguay to the north and Brazil and Uruguay to the northeast. Argentina claims sovereignty over part of Antarctica, the Falkland Islands (Spanish: Islas Malvinas) and South Georgia and the South Sandwich Islands.

The country is a federation of 23 provinces and the autonomous city of Buenos Aires, its capital and largest city. It is the eighth-largest country in the world by land area and the largest among Spanish-speaking nations. Argentina has a population over 45 million people. Argentina is a founding member of the United Nations, Mercosur, the Union of South American Nations, the Organization of Ibero-American States, the World Bank Group and the World Trade Organization, and is one of the G-15 and G-20 major economies.

A recognized Southern Cone power, and middle power, Argentina is Latin America's third-largest economy, with a "very high" rating on the Human Development Index (HDI). Within Latin America, Argentina has the fifth highest nominal GDP per capita and the highest in purchasing power terms. Analysts have argued that the country has a "foundation for future growth due to its market size, levels of foreign direct investment, and percentage of high-tech exports as share of total manufactured goods," and it is classed by investors as middle emerging economy.

Actors/Actresses and Crew born in Argentina

The flag of Argentina