20,000 Leagues Under the Sea: Submarine Voyage

Formerly a colorful grotto in which Ariel, in mermaid form, was available for autographs and photo opportunities. The meet-and-greet area was decorated with starfish, coral, and waterfalls. King Triton's Fountain leading to the grotto featured a soft-surface "sandy beach" play zone dotted with jumping fountains. In August 2008, the area at was closed. It has since been re-themed to Pixie Hollow, a Disney Fairies meet-and-greet attraction amid over-sized 'plants' which gives guests the sense of being the size of a fairy.

In April 2010, the Ariel's Grotto attraction at Magic Kingdom was closed. It reopened as part of the New Fantasyland expansion along with the ride Under the Sea: Journey of the Little Mermaid. It features a similar meet-and-greet beside the attraction. It is in a cave, next to Prince Eric's Castle, surrounded by waterfalls and large rock formations.

Ariel's Grotto was also the name given to the former 20,000 Leagues Under the Sea: Submarine Voyage lagoon after its closure. For this, a King Triton spouting statue was added, both waterfalls were shut off, and were covered with a vine-like scrim.

Ariel's Greeting Grotto was a character meet-and-greet attraction. Originally scheduled to close on March 31, 2020, it closed early on January 31, 2020 in response to the coronavirus outbreak.

However, on September 29, 2020, it was "reopened" inside Mermaid Lagoon Theater as a socially distanced greeting with Ariel in her mermaid form. 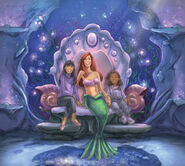