20,000 Leagues Under the Sea: Submarine Voyage

Formerly a colorful grotto in which Ariel, in mermaid form, was available for autographs and photo opportunities. The meet-and-greet area was decorated with starfish, coral, and waterfalls. King Triton's Fountain leading to the grotto featured a soft-surface "sandy beach" play zone dotted with jumping fountains. In August 2008, the area at was closed. It has now been re-themed to Pixie Hollow, a Disney Fairies meet-and-greet attraction amid over-sized 'plants' which gives guests the sense of being the size of a fairy.

In April 2010, the Ariel's Grotto attraction at Magic Kingdom was closed. It reopened as part of the New Fantasyland expansion along with the ride Under the Sea: Journey of the Little Mermaid. It features a similar meet-and-greet, beside the attraction. It is in a cave, next to Prince Eric's Castle, surrounded by waterfalls and large rock formations.

Ariel's Grotto was also the name given to the former 20,000 Leagues Under the Sea: Submarine Voyage lagoon after its closure. For this, a King Triton spouting statue was added, both waterfalls were shut off, and were covered with a vine-like scrim. 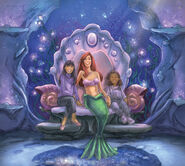 Retrieved from "https://disney.fandom.com/wiki/Ariel%27s_Grotto?oldid=3810914"
Community content is available under CC-BY-SA unless otherwise noted.