Ariel's Story Studio (sometimes known as Disney's Animated StoryBook: The Little Mermaid) is a PC game made in 1997 that adapts the story of The Little Mermaid into an interactive storybook. It also has a "Create Your Own Storybook" feature that allows players to devise their own storybooks, both words and pictures, and then print out the finished product.

While Sebastian the crab and King Triton, Ariel's father, witness that Ariel, the mermaid princess, is not in the music concert that her six older sisters, Attina, Alana, Adella, Aquata, Arista, and Andrina, are in, Ariel enters the shipwreck with Flounder and finds a fork and a pipe that were lost in the sunken ship. A shark arrives, but Ariel helps Flounder outsmart a shark that meanwhile gets stuck in an anchor. Ariel and Flounder Scuttle the seagull her human treasures, but Ariel heads for home with Flounder following after.

After Triton orders her not to go into the human world, Ariel collects human treasures in her grotto, while Sebastian watches her under orders from King Triton who wants him to keep her out of trouble, behind the back of Ursula the sea witch and her pet eels, Flotsam and Jetsam. Ursula hates Triton, and she says that he has Sebastian watching over Ariel.

With Sebastian and Flounder following her, Ariel watches Eric's ship. Scuttle gives to Ariel a binocular and helps her see Chef Louis, Grimsby, Max the dog, and Prince Eric. Max angrily barks at a statue that was given to Eric. A storm rages and destroys Eric's ship and tosses Eric overboard. Max, Grimsby, Chef Louis, and the sailors escape from the burning ship and return to their home on a boat. And in the midst, Ariel rescues Eric from drowning and sends him to shore.

Ariel sings the "Part of Your World" song to Eric, while Scuttle, Sebastian, and Flounder witness this. Eric comforts Ariel and makes love to her after being saved by her from drowning to death. Sebastian says to Ariel that King Triton will not like this. After Ariel leaves, Max arrives.

Ariel picks sea flowers and says that she is in love with a human named Eric. Sebastian tries to convince Ariel that the sea is better, but Ursula says that under the sea is no place for Ariel, who longs to be part of the human world. Sebastian accidentally races to Triton who is concerned about Ariel wanting to be with Eric.

Flounder shows the statue to Ariel, but Ariel faces Triton, who tells her that being in the human world is strictly forbidden. In the midst, after Ariel confronts Triton about saving a human from death, Triton confronts Ariel and begins destroying all of her human treasures. While Ariel grieves, she begins weeping over the loss of her treasures. Flounder and Sebastian repair all of Ariel's human treasures back to regular, but Flotsam and Jetsam sweet talk Ariel into going to the domain of Ursula the sea witch. Ariel, who does not listen to Flounder and Sebastian, joins Flotsam and Jetsam and gets to see Ursula.

Ursula comforts Ariel and reminds her that she will turn her into a human for three days. Ariel signs the contract and gives her voice and fins to Ursula who transforms her into a human. Flounder and Sebastian carry Ariel to shore.

Grimsby tells Eric and Ariel to have fun. Eric shows to Ariel the tour of the kingdom. The two ladies are doing laundry, but one boy jumps into the water, and the mom fishes him out. Ariel pulls a puppet out of a puppeteer's hands. Eric and Ariel dance with each other and become good friends. Scuttle asks Flounder if there is any kissing involved, but Flounder says there is not.

Eric tries to tell Ariel a girl's name. Sebastian tells Eric that Ariel's name is Ariel. Finally, Eric mentions Ariel's name to Ariel. Before Eric and Ariel almost kiss, they get squirted with water by Flotsam and Jetsam. Meanwhile, Ursula fumes and transforms herself into Vanessa and bewitches Eric.

After Flounder and Sebastian watch as Ariel begins weeping over Eric's loss, Scuttle and his sea friends crash the wedding, not allowing Vanessa to say 'I do'. Flounder helps Ariel get to the ship. Scuttle pulls the necklace off of Vanessa, and Ariel regains her voice back. Eric comes to Ariel and tells her she is the right woman for him. Ariel and Eric almost kiss, and the sun sets and Ariel transforms back into a mermaid. Ursula reveals her true form and takes Ariel with her. Max barks and Eric says that he will not lose Ariel again.

Triton confronts Ursula and demands her to release Ariel, but no avail. Flounder reminds Ariel to be careful, and Sebastian says that Triton will fix everything. Ariel apologizes to Triton for disobeying him. Ursula tells Triton to sign the contract having Ariel released. Meanwhile, Triton saves Ariel only by signing the contract and giving Ursula his crown and trident. And after Triton is transformed into a polyp, Ursula becomes queen of the ocean. When Ariel confronts Ursula and points a finger at her, Ursula points the trident at Ariel. Eric throws a harpoon onto Ursula's arm. Ursula threatens to destroy Eric, but Ariel stops her and does not want her to destroy him. As Ariel joins Eric, Ursula becomes enraged and enlarges herself into a giant.

Ariel reminds Eric to be careful. Ursula says that she is now the ruler of the ocean, and she will make the sea and all of its spoils bow to her power. Eric faces the final battle with Ursula on the surface. Just as Ursula is about to sabotage Ariel by using the trident, Eric saves Ariel and skewers onto Ursula, leading to her transformation into a polyp. 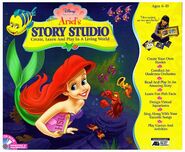 Retrieved from "https://disney.fandom.com/wiki/Ariel%27s_Story_Studio?oldid=3944699"
Community content is available under CC-BY-SA unless otherwise noted.