Arihnda Pryce is an antagonist who is introduced in the third season of Star Wars Rebels, before appearing again in the fourth and final season. She is the Planetary Governor of Lothal.

Arihnda Pryce is an ambitious human woman who looked down upon her Lothalian roots. While she was from Lothal, she had no interest of remaining on Lothal. She sold out her homeworld to the Emperor and allowed the Empire to make Lothal their local headquarters in the Lothal Sector. She placed her own ambitions and career aspirations over the interests of her people, and took pleasure in the suffering she caused them; this stood in contrast to her deputy ruler, Maketh Tua, who genuinely cared for the people. She rarely visited Lothal and only returned to her homeworld because the planet had become a haven for rebels for the past two years.

Her position as a planetary governor gives her an inflated ego such that she derides imperial officers such as Kallus and Konstantine, adhering instead to Thrawn, holding him in high regard in that she never questions his orders, which is interesting as most Imperials hold alien species in low regard.

Despite serving under Thrawn, Pryce is far more evil than him. Thrawn generally does not like killing people unless he has to and is much more methodical in his tactics. Pryce, on the other hand, is a borderline psychopath who tortures people simply because she enjoys seeing them in pain, as is evident when she captures Hera. However, she is also cowardly—her murder of Kanan costs the Empire their entire fuel supply, so she throws a parade to draw attention to Kanan’s death in an effort to cover her tracks from Thrawn.

Governor Pryce made no appearances in the first season but was mentioned by the Imperials who govern Lothal. She was absent from Lothal due to business on Coruscant and she left Maketh Tua in charge during her absence.

Governor Pryce makes her debut in the third season of the series. It's revealed in Steps Into Shadow that she returned to Lothal sometime after the death of Maketh Tua.

Sometime after the Duel on Malacor, Arihinda met with Grand Moff Wilhuff Tarkin to discuss the growing threat of the Rebel Network. Tarkin agreed with her assesment that it's becoming a major threat to the Empire and asked her what she was going to do about it. Pryce told Tarkin she would like to bring in the Seventh Fleet. Tarkin reminds her that Admiral Konstantine's fleet is already purisng the Rebels with Agent Kallus. Pryce tells Tarkin that while Konstatine has proven himself competent, he is more politican than soldier and she needs someone who sees a bigger picture. She later arrives at Agent Kallus's command ship with Grand Admiral Thrawn in tow. Thrawn quickly sets to work to destroy the growing Rebellion.

Later, Pryce discovers that cadets intended to desert the empire in an academy training TIE pilots. She discovers that the rebel spy was Sabine Wren. Sabine succeeds in knocking out Pryce and escaping.

In the episode, "An Inside Man", Pryce has Thrawn inspect the Imperial Factory on Lothal for sabotuers who have been sabotaging Imperial Vechicles. When Thrawn has one of the factory workers killed for building a faulty speeder bike, Pryce watches and smirks.

In the Season 3 finale, Agent Kallus is found by Thrawn to be the Rebel spy. He is captured and remains in Thrawn and Pryce's custody for most of the Battle of Atollon. After Kallus mocks her for "making a mess of Thrawn's fleet", Pryce snaps and orders her troopers to execute him. He knocks them unconscious and escapes, officially joining the Rebel Alliance.

Some time later, after the Imperial blockade shoots down a fighter force of X-Wings and Y-Wings attempting to attack the Imperial Armory Complex, Pryce has Rukh and her forces hunt for the surviving pilots, soon capturing Rebel leader Hera Syndulla, who Pryce brings back to the Capital City for interrogation. Pryce brutally tortures Hera out of sadistic pleasure without even asking her any questions. However, during the interrogation, as Pryce finally does start asking questions and gives Hera a truth serum to spill the beans about the location of the rebel base, Thrawn is summoned to speak to the Emperor on Coruscant regarding the TIE Defender project and funding for it being pulled to fund the construction of the DS-1 Orbital Battle Station instead. With Thrawn offworld, Pryce is caught off-guard when Kanan, Ezra, and Sabine arrive to rescue Hera and escape.

Pursuing them in her AT-AT walkers to the city's fuel depot, Pryce orders her men to fire on the fuel pods, despite their objections as to the consequences if they do. This results in the entire fuel depot going up in flames, but Pryce learns that Kanan was killed in the explosion. Satisfied, she decides to hold a parade to celebrate Kanan's death and draw attention away from her blunder, but upon being contacted by Thrawn, he is furious to discover her actions. Pryce tries to downplay it by revealing Kanan's lightsaber to prove he's dead, but Thrawn scolds her that the loss of the fuel depot puts his TIE Defender project out of business, so the funding will go to the Death Star instead. Thrawn warns Pryce that when he returns to Lothal, she will be facing severe punishment, if not execution, for her actions.

Now fearing for her life if she does not find some way to regain Thrawn's favor, Pryce learns that Ryder is offering to give up the location of their hideout in return for amnesty. Taking up the offer, Pryce arrives with Rukh and her forces to capture the Rebels, but it turns out that she was lured into a trap and that Ryder only baited her into coming to the rebel hideout so that they could take her into custody. When Ezra has the Rebels flee into a cave, she gives orders to Rukh and her men to bring Ezra back alive, but to kill the rest. However, she soon is horrified when several Loth-Wolves emerge from the cave and begin tearing her Stormtroopers apart in a ferocious rampage to aid the Rebels, while her transports are shot down by Hera in the Ghost. Pryce herself is soon captured by the Loth-Wolves and brought back before Ezra, pleading for mercy, asking him to not let the wolves devour her. Ezra gives Ryder the privilege of arresting her.

With her surviving troops having surrendered, Pryce is taken into Rebel custody, and is used to grant the Rebels access to the Capital City, under threat of being fed to the Loth-Wolves if she refuses, so they can summon all the Imperial garrison troops into the central command center to launch into the sky and destroy in one fall swoop to liberate Lothal. However, Rukh (having survived the attack from the Loth-Wolves) disables the city's planetary shields and contacts Thrawn, who returns earlier than expected, threatening to bombard the capital if Ezra does not surrender to him. However, while Ezra willingly turns himself into Thrawn and is brought before the Emperor, Pryce remains behind as Zeb kills Rukh while the rest of the rebels restore the shields. Several Purrgils summoned by Ezra wipe out the Imperial blockade, leaving only Thrawn's Star Destroyer, which they then drag into hyperspace, taking Ezra and Thrawn with it.

With the Capital City safe, the blockade destroyed, and the main dome with all her troops in it about to be launched into the sky and destroyed as well, Pryce is given the offer to join the Rebels, but Pryce instead chooses to go down with her men, remaining loyal to the Galactic Empire and facing death with dignity, looking out the viewport one last time before the dome is destroyed, taking her and all the remaining Imperial troops on Lothal with it.

Governor Pryce is the assist character for Grand Admiral Thrawn, available as a Unique card.

Governor Pryce in her last moments 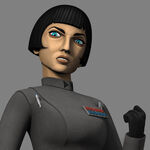