Ark of the Covenant

Ark of the Covenant

“The Bible speaks of the Ark leveling mountains and laying waste to entire regions. An army which carries the Ark before it is invincible.”
―Marcus Brody

The Ark of the Covenant is a sacred golden chest that appeared in the Indiana Jones film Raiders of the Lost Ark. It was used to carry the Ten Commandments and the power of God.

In his anger, Moses smashed the Ten Commandments when the other Hebrews worshiped a golden calf instead of God. The Hebrews gathered the pieces and put them in the Ark, which they sent to the Taberacle. It was later put into place called the Temple of Solomon where it stayed for many years until it was found by an Egyptian Pharaoh. The Ark was sent to the City of Tanis and locked away in a secret chamber called the Well of Souls before a ferocious sandstorm buried the entire city by the Wrath of God. It was also foretold if an army carried the Ark into battle would become invincible.

Raiders of the Lost Ark

In 1936, some Government Officials informed Indiana Jones that the Nazis had discovered the city of Tanis and hellbent on finding the Ark of the Covenant. He teamed up with Marion Ravenwood and Sallah on a daring quest to search for the lost Ark. Once it was found in the Well of Souls, Indy fought against Belloq and the Nazis over the Ark. When Belloq and the Nazis open the Ark, death angels killed them all, but Indy and Marion were spared. They survived by closing their eyes and looking away, symbolically showing proper respect. Government Officials then sent the Ark to a secret government warehouse where it began to gather dust once again.

The Ark made a cameo in The Last Crusade and a brief appearance in Kingdom of the Crystal Skull.

A Twi'lek version of the Ark was first seen in the background element in Star Wars: The Clone Wars and among the treasures aboard a transport in the Star Wars Rebels episode "The Wynkahthu Job".

The Ark of the Covenant can also be seen buried in the ground as the Dalmatian Puppies run through Diesel's tunnel in the "101 Dalmatian Street" two-parter, "The Devil Wears Puppies".

Glimpse of the Ark at Galaxy's Edge 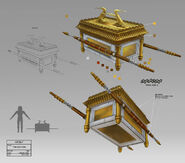 The Ark Of The Convenant in "101 Dalmatian Street".