Around the World with Timon & Pumbaa

Around the World with Timon & Pumbaa is a home video inspired by The Lion King's Timon & Pumbaa. It was first released on VHS on September 12, 1996, then it got re-released on VHS and DVD on June 7, 2004. It is a recapitulation of six episodes and a music video from the television series and the first of three volume compilations about Timon and Pumbaa.

Unlike the other two volumes, Dining Out with Timon & Pumbaa and On Holiday with Timon & Pumbaa, this one doubles as an OVA, as it features an original story in which Pumbaa gets struck by lightning and develops amnesia and Timon tries to restore his friend's memories through the episodes featured in that video.

Around the World with Timon & Pumbaa begins by introducing Timon, a meerkat, and his warthog friend, Pumbaa. At the start of the film, the two are traipsing the jungle, praising their good fortune. No sooner have they done this when the sky grows dark with clouds, and a bolt of lightning strikes Pumbaa. Horrified, Timon races to his friend's aid and drags the warthog to a nearby cave, where he attempts to revive Pumbaa. When the warthog awakens, he reacts with confusion to his own name, and Timon realizes that his friend has lost his memories. In order to restore Pumbaa's memories, Timon decides to recount their many adventures together.

Timon starts by telling Pumbaa the story of the Three Natives, but at the end of the tale, Pumbaa cannot remember his past life. Getting a new idea, Timon decides to show his friend pictures in order to revive his memories. He first shows Pumbaa a photo from Nevada, then one from Africa, and finally, a shot from Canada. Though the other pictures produce no effect on the warthog, Pumbaa comments that the photo from Canada looks familiar.

After Timon tells Pumbaa the story about Canada, Pumbaa still cannot remember his past life, so Timon reintroduces his friend to Rafiki, Scar, and Simba. Nothing works until Timon shows Pumbaa a flying squirrel named Piper.

After Piper's story is told, Pumbaa is sorry but he still can't remember anything. Timon's mood dampens, and he sobs and cries about what would happen to Timon and Pumbaa without Pumbaa meaning no more hakuna matata good times and they will never ever sing together again. Surprised, Pumbaa then asks if they can sing, and the two perform "Stand By Me." After the song comes to an end, Pumbaa comments that maybe he's just hungry, so Timon fetches him a platter of bugs. Pumbaa eats the bugs willingly enough but then his face color turns green and he spits them back up turning his face color back to normal, forgetting his past taste for them.

Seizing the opportunity to talk about bugs, Timon tells Pumbaa about the time bugs got them into trouble, but Pumbaa remains in the dark about his memories. Desperate, Timon attempts hypnosis on Pumbaa.

The hypnosis doesn't work, but when the storm comes to a stop, Timon decides to visit Pride Rock, where he holds Pumbaa high above the summit. The procedure fails to arouse the warthog's memories.

After the Pride Rock failure, Timon gives up on ever getting his friend back. Unexpectedly, Pumbaa starts to cry and exclaims that he will never forget Pumbaa Jr.. At this point, the warthog finally gets his memories back, but at almost the exact same instant, Timon is hit by lightning and loses his memories. Pumbaa then breaks the fourth wall by asking the young viewers to rewind the tape and watch the film again for Timon to remember. 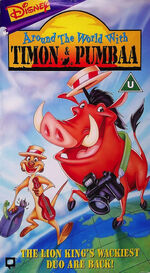 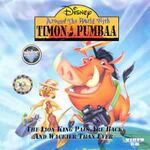 Pumbaa hearing Timon crying over him not remembering anything

Pumbaa has never seen Scar in his life

Timon pulling out Scar to get Pumbaa to remember

Pumbaa struck by lightning and his color skin turned Purple

Timon urging Pumbaa to remember anything

Timon & Pumbaa walking out of the Cave looking at the sun

Timon zapped by lightning which Pumbaa is shocked and upset

Timon crying over Pumbaa not remembering anything

Pumbaa gets surprised and asks if they can sing