His name comes from a spoonerism of Arsène Lupin, a fictional character from novels by Maurice Leblanc. The switcheroo spelling is ironic (or delicious, or funny) partly because Leblanc himself once changed the spelling of the name of a character (who was "visiting", in a way, from the works of another author) from "Sherlock Holmes" to "Herlock Sholmes", in response to legal objections from the author (Arthur Conan Doyle) who was the original creator of Sherlock Holmes. In the Swedish translation, his name is "Armand Lutin", a play on "Arsène Lupin".

Arpin has, naturally, a cheesy French accent which other characters have hard time understanding at times, often leading to clever wordplay. Also, he often botches English expressions, like garbling the phrase "dead end" as deceased end. Apparently, Lusene even writes in his accent, spelling English words phonetically as he would pronounce them. His home has been said to be a castle in Portofino on the Italian Riviera.

He is a sticky fingered thief. On some occasions he is even seen stealing people's clothes while the victims are wearing them. His life's goal is to steal Scrooge McDuck's money, or make it disappear to make people think he stole it. His motive for this is to be remembered as the greatest thief ever to exist, rather than to make a profit out of it, as he has plenty of money already.

Lusene strictly refuses to appear in any photographs, claiming he has never been photographed. He likes to use his extreme dexterity to avoid being photographed. He once removed the filament from the lightbulb of a camera's flash, without breaking the bulb glass.

Usually on his appearances, Lusene wears an armor of a knight, almost completely covered in Gyro Gearloose's invention, a universal solvent which has the ability of absorbing all kinds of matter, excluding diamonds. Only Lusene's hands, feet, and the handle of his sword are not coated with the universal solvent, and even this only so that he won't accidentally dissolve the floor he walks on or his own sword.

Arpin is the only present day character that Don Rosa has created for the Duck Universe, that has made more than one appearance. So far he has only made appearances on covers by other artists like Marco Rota. 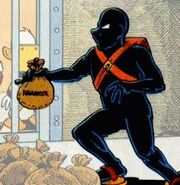 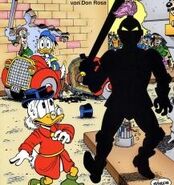 This cameo alongside other comics and animated villains in the DuckTales comic is one of the few Lusene's appearances not by Don Rosa.
Add a photo to this gallery
Retrieved from "https://disney.fandom.com/wiki/Arpin_Lusene?oldid=4438823"
Community content is available under CC-BY-SA unless otherwise noted.