The Secret World of Arrietty

Arrietty from the stories by Mary Norton

Humans (formerly), her family hurt or in danger, failing her first borrowing

Pin (sword), her height (in some cases), a spoon

Arrietty Clock is an almost 14-year-old borrower in Studio Ghibli's The Secret World of Arrietty. This is a Hayao Miyazaki film that was adapted from Mary Norton's novel The Borrowers.

Arrietty is extremely inquisitive, adventurous, and always willing to help, no matter the consequences or the risk. She's uncompromisingly courageous and eager to be a part of bigger things, both in the literal and figurative senses. She's open-minded, clever, and resourceful, an intuitive nonconformist/progressive who refuses to fit into the conventional mold of timid borrowers who are terrified of humans. She befriends Shawn because she sees the traditional boundaries between their two worlds as conditional and outdated, and because she understands that associating with him is worth the (calculated) risk because he, being a human, can help her situation like no one else can.

Arrietty's open-mindedness shows when she refuses to judge all humans by the few who are evil (like Haru); in her successful befriending of Shawn, she shows a theme of the movie.

A spirited and passionate sometimes-daredevil, Arrietty is all the reason she's a more powerful borrower because she is motivated by her high degree of familial loyalty and compassion. She is unafraid to speak up and act for what she believes in.

Arrietty is approximately 4 inches tall. She uses a tiny red clothespin-like object to hold her chestnut hair back when she is adventuring, and after she finds her pin, she carries it everywhere, along with her lasso and satchel. She has dark eyes and light skin.

While she has several outfits, including several that are never worn but are seen spread out on her bed (for example, there is a green jumpsuit with long pants and tons of pockets), Arrietty's favorites seem to be two comfortable red dresses, one with a turtleneck collar and long sleeves, and one with a nicked collar and short sleeves. She wears brown boots with them. When she is not borrowing or traveling, she wears a yellow dress with a copper top and copper shoes.

Arrietty and her family have to be very resourceful if they are to survive in their little unconnected world where goods are made only for "Beans" (humans). So they use staples as ladder rungs and tape stickers as climbing devices, and when Arrietty finds a pin in the kitchen of Aunt Jessica's house, she immediately sees its potential as a sword.

This is Arrietty's weapon of choice, and not only is it a symbol of her ascension from "Daughter of Borrower" to "Borrower," but it's also very useful; she uses it to cut the saran wrap on top of the jar her mother is trapped in, and thus successfully complete the rescue mission.

She is also seen using a green spoon (before she finds the pin) to ward off a cockroach larger than she.

When Shawn is locked into his room by Haru, Arrietty displays her resourcefulness by getting out onto the roof, squeezing through the window to a different room, climbing up the curtain with human earrings as hooks, and pushing the window latch open, thus allowing both Shawn and herself to get into the rest of the house to find Homily.

None of this intelligence, though, would be useful without Arrietty's adventurous nature and courage--she seeks a more interesting and fulfilling life, and if it means competing with grasshoppers for nuts and flowers or risking the dangers of human interaction to save her mother, then so be it. Arrietty is a hero. 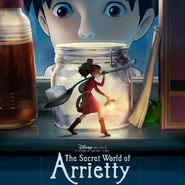