This article is about the television series. For others, see Art Attack.

June 15, 1990 – June 12, 2015
Art Attack is a British children's television series revolving around art hosted by Lloyd Warbey on Disney Junior. The original series was one of CITV's longest running programmes, running from 1990 to 2007, and was presented throughout by Neil Buchanan.

The new series launched on Disney Junior (UK & Ireland) on June 6, 2011 and was presented by Jassa Ahluwalia. Each show involved Ahluwalia voicing-over footage of an artist producing three works of art, taking the viewer through the various stages of production step by step.

The programme was originally a Non-Disney production produced by Television South and devised by two TVS employees, Neil Buchanan and Tim Edmunds. Buchanan and Edmunds met each other at Southern Television in 1978, and worked together on No. 73 and Do It!.

The first Art Attacks were a strand within No. 73, and this segment proved so popular, Nigel Pickard the executive producer of children's programming at TVS green lit the pilot. The Art Attack pilot was shot on location at a disused swimming pool in Gillingham, Kent in 1989, and the series began the following year.

When TVS lost its franchise holdings to Meridian Broadcasting Edmunds and Buchanan bought the rights to the show and produced Art Attack through their company, The Media Merchants. The Media Merchants used Scottish Television Enterprises (Later known as "SMG Productions") as the production company holder to get the series on to network. This was partly down to the fact Nigel Pickard moved to Scottish Television. The rights to the STV shows have since reverted to the copyright holder.

In 1998, The Walt Disney Company acquired the rights to make localized European versions of the show to air on Disney Channel. These versions had a different local host for each territory, and was made in Maidstone, on a similar set to the original version. Neil Buchanan's Big Art Attacks were retained in the international shows, as was The Head, who was dubbed by relevant local voice artists. Buchanan also produced the artwork for the foreign versions - footage of his hands creating the pieces would be voiced over by the local host, who would show the artwork in-between stages and explain what to do next. Disney ended production of these versions in 2005.

In 2000, The Media Merchants was acquired by Thomas the Tank Engine owner The Britt Allcroft Company, later renamed Gullane Entertainment. The ownership transitioned again, to Bob the Builder owner “HiT Entertainment” in 2002 after the latter purchased Gullane.

ITV announced the cancellation of the original UK version of the series in July 2007.[1] the majority of the Art Attack production team transferred over to the company The Foundation and worked on their shows Finger Tips and Mister Maker (both recorded at The Maidstone Studios). HiT Entertainment have since sold off the rights to Art Attack.

In 2010, Disney announced a new version of the series would air on Disney Junior in various countries. This version is recorded on a set in Buenos Aires and all feature their own local host. In the UK, it was hosted by Jassa Ahluwalia for the first season and Lloyd Warbey for the rest. The Revived UK series lasted for 4 seasons.

The Head, was a puppet stone bust who humorously recaps the steps needed to produce the last art piece made. After doing this, he would usually show his creation of the previous art attack, most times however getting it hilariously wrong and usually bursting into tears. However, on one occasion, by accidentally doing part of the instructions incorrectly, he creates a similar effect than desired and is proud of his work. He can sometimes tell jokes after the Big Art Attacks.

In the revived series, The Head was replaced by a talking palm tree called Vincent Van Coconut, voiced by Tim Hibber. His name, Vincent van Coconut is a parody of the famous Post-Impressionist painter Vincent van Gogh.

No DVD releases have been issued, except DVDs that come with Art Attack books and DVDs which come free with newspapers; including an Art Attack episode taken from CITV Favourites VHS (released in 1999).

However, in India, Art Attack was released in three volumes by Disney DVD in 2010. It is unknown whether there are any plans to release the volumes in the UK.

Many Art Attack books were also released by Dorling Kindersley. 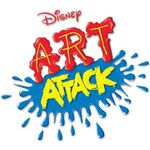