Disney Wiki
Register
Don't have an account?
Sign In
Advertisement
in: Films, Films based on books, Disney films,
and 6 more
English

Conor McPherson
Hamish McColl
Eoin Colfer (based on the books by)

$130 million
Artemis Fowl is a 2020 fantasy film adaptation of the book series of the same name. The film was directed by Kenneth Branagh and released on June 12, 2020 on Disney+. Originally intended to be released in theaters, the film was moved to a release on Disney+ as a result of the COVID-19 pandemic.

“Your family has taken something of great value from us. Return it to me or I will destroy everything you love.”
―Opal Koboi[src]

Disney's Artemis Fowl, based on the beloved book series by Eoin Colfer, is a fantastical, spellbinding adventure that follows the journey of 12-year-old genius Artemis Fowl as he seeks to find his father who has mysteriously disappeared. With the help of his loyal protector Butler, Artemis sets out to find him, and in doing so uncovers an ancient, underground civilization—the amazingly advanced world of fairies. Deducing that his father’s disappearance is somehow connected to the secretive, reclusive fairy world, cunning Artemis concocts a dangerous plan—so dangerous that he ultimately finds himself in a perilous war of wits with the all-powerful fairies.[1]

In July 2013, Walt Disney Pictures announced that an Artemis Fowl film would be produced by Disney and The Weinstein Company, with the screenplay by Michael Goldenberg. Robert De Niro and Jane Rosenthal signed onto the project as executive producers.[1] On September 1, 2015, Variety reported that Kenneth Branagh had been hired to direct the film for Disney, with Irish playwright Conor McPherson as screenwriter and Judy Hofflund as an executive producer.[2] On September 12, 2017, Disney announced that the film adaptation will be released on August 9, 2019. The following month, Disney removed Harvey Weinstein as the producer of the film and terminated its production partnership with The Weinstein Company following a sexual misconduct scandal involving Weinstein.[3] Colfer supports the changes from the source material in the film.

On September 18, 2017, it was reported that Judi Dench was in talks for an unspecified role.[4] On December 20, 2017, it was announced that Irish newcomer and grandson of Robert Shaw, Ferdia Shaw, had been cast as Artemis Fowl II, alongside Dench as Commander Root, Josh Gad as Mulch Diggums, Lara McDonnell as Holly Short, and Nonso Anozie as Domovoi Butler.[5]

On review aggregator website Rotten Tomatoes, the film holds an approval rating of 8% based on 171 reviews, with an average rating of 3.70/10. The site's critics consensus reads: "A would-be franchise-starter that will anger fans of the source material and leave newcomers befuddled, Artemis Fowl is frustratingly flightless."[2] On Metacritic, the film has a weighted average score of 31 out of 100, based on 33 critics, indicating "generally unfavorable reviews".[3]

The Disney Wiki has a collection of images and media related to Artemis Fowl. 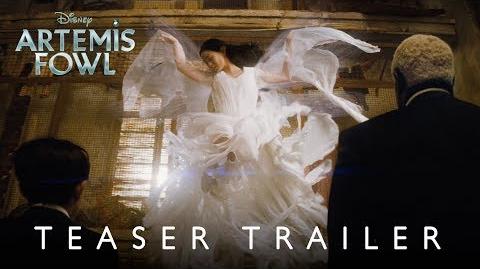