Disney Wiki
Register
Don't have an account?
Sign In
Advertisement
in: People, Agents of S.H.I.E.L.D., Disney Channel Actors and Actresses,
and 14 more

Artemis Pebdani is an American actress, best known for her roles in It's Always Sunny in Philadelphia as Artemis Dubois and Scandal as Susan Ross.

Major roles from Disney shows include LT Koenig in Agents of S.H.I.E.L.D. and she started to provide the voice of Gramma Alice in Big City Greens. She also voiced Captain Creighton the Tangled: The Series episode "Who's Afraid of the Big, Bad Wolf?". In addition, she appeared as Duff in the movie Godmothered. 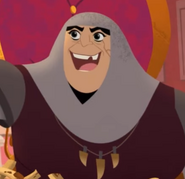 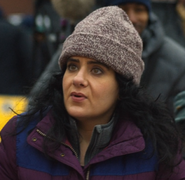 Artemis Pebdani speaks at the Son of Zorn panel at the 2016 Summer TCA Tour.