His Disney roles included Mr. Dawes Jr. in Mary Poppins, Sir James Fryar-Smythe in the Walt Disney's Wonderful World of Color episode, "The Further Adventures of Gallegher: The Big Swindle", Umbrella Man in Lt. Robin Crusoe USN, Mr. Widdenfield and the museum guard in the restored 25th-anniversary version of Bedknobs and Broomsticks, King Eidilleg in The Black Cauldron, and a diner patron in Dick Tracy. 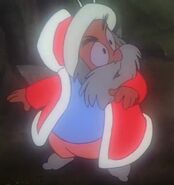 King Eidilleg
(The Black Cauldron)
Add a photo to this gallery
Retrieved from "https://disney.fandom.com/wiki/Arthur_Malet?oldid=4101056"
Community content is available under CC-BY-SA unless otherwise noted.