Arthur M. "Artt" Butler is an American voice actor. Starting the journey as the lead booth director at one of L.A.'s top voiceover agencies, he quickly became a very talented voice actor. For Disney, he voices Admiral Ackbar in Star Wars: The Clone Wars and Mr. Diaz in Star vs. the Forces of Evil. He also voiced Roberto Núñez in Disney Channel/Disney Junior's Elena of Avalor and did additional voices on Tangled: The Series.

Mr. Diaz
(Star vs. the Forces of Evil) 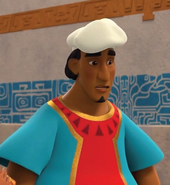 Dale
(Tangled: The Series)
Add a photo to this gallery

Retrieved from "https://disney.fandom.com/wiki/Artt_Butler?oldid=3914062"
Community content is available under CC-BY-SA unless otherwise noted.