Recess: School's Out
Recess: Taking the Fifth Grade
Recess: All Growed Down

T.J. Detweiler, Ashley Spinelli, and the rest of the Recess Gang (Most of the time)

Not getting her way

Graduates fourth grade
Ashley Boulet, a.k.a Ashley B.[3] (voiced by Francesca Smith) is one of the four Ashley's in Recess.

Like the other Ashleys, Ashley B. is just as snobby, and is shown to be one of the most sarcastic members of the clique. She is primarily interested in fashion and gossip. She met the other Ashleys one day in kindergarten at a playground, where all their hats were blown off their heads, and when they tried to get them, they bumped into each other and introduced themselves, becoming friends. Since then, the anniversary of when they first met has been known as "Purple Day", as the girls all wore purple when they met, and thus only purple can be worn on "Purple Day". When Ashley A. accidentally forgot to wear purple on that day, Ashley B. kicked her out of the clique and quickly took over leadership position. Though by the end of the episode, they made up.

Ashley B. is considered the closest to Ashley A., as they're usually seen together more often than the other Ashleys. She has also shown to be quite nice in certain situations as well. 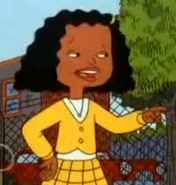 Ten-year-old Ashley B. in Recess: Taking the Fifth Grade

Five-year-old Ashley B. in Recess: All Growed Down 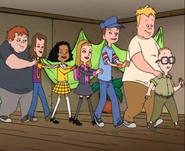 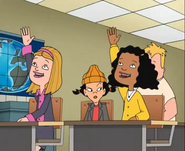 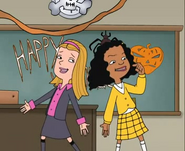 Retrieved from "https://disney.fandom.com/wiki/Ashley_Boulet?oldid=3028432"
Community content is available under CC-BY-SA unless otherwise noted.