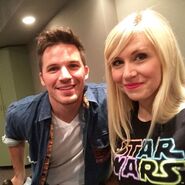 Ashley Eckstein, Dave Filoni, and Simon Kinberg attending the Season 2 finale of Star Wars Rebels in March 2016.
Ashley-Eckstein-Star-Wars-Celebration-2017.jpg
Ashley Eckstein at the Star Wars celebration in December 2017.
Add a photo to this gallery

Retrieved from "https://disney.fandom.com/wiki/Ashley_Eckstein?oldid=3017889"
Community content is available under CC-BY-SA unless otherwise noted.