Ashley Rose Orr is an American actress and voice actress.

For Disney, she played the role of Shirley Temple in Child Star: The Shirley Temple Story (in tandem with Emily Hart) and Francesca in That's So Raven. She also provided the voice of a girl and additional voices in the English dub version of My Neighbor Totoro, the ADR voice for Jonas Brothers: The 3D Concert Experience, and Raimu "Rhyme" Bito in the video game Kingdom Hearts 3D: Dream Drop Distance. 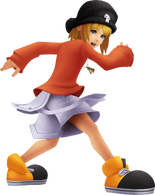