Disney Wiki
Register
Don't have an account?
Sign In
Advertisement
in: Locations, Continents, The Jungle Book,
and 16 more

This article is about the continent. For the themed land at Disney's Animal Kingdom, see Asia (Animal Kingdom). 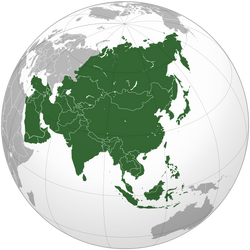 Asia is the largest continent and populated the Earth with about 44 million square kilometers, accounting for 8.70% of the total land area and 29.45% of the land area and with 4,140,000,000 inhabitants, 61% of the world population. It extends over the eastern half of the northern hemisphere, from the Arctic Ocean to the north, the Indian Ocean to the south. Bordered to the west by the Ural Mountains, and on the east by the Pacific Ocean.

In the conventional division of continents, from Europe, Asia and Europe appear as two different entities for cultural and historical reasons. Geographically, they form a single continent called Eurasia. Furthermore, Eurasia is joined to Africa by the Suez Canal so it can also be seen throughout the joint area of ​​Europe, Asia and Africa as a single supercontinent Afro-Eurasia.