The Lion, the Witch and the Wardrobe
Prince Caspian

Guardian, savior, deity, and the one true King of the New Narnia
Conqueror of the White Witch
Judge of Narnia
Creator of Narnia

His own Country (originally)
Narnia (frequently)

Emperor from Beyond the Sea (father)

“Wrong will be right when Aslan comes in sight. At the sound of his roar, sorrows will be no more. When he bears his teeth, winter meets it death. And when he shakes his mane, we shall have spring again.”
―Mr. Beaver explaining the endless goodness of Aslan to the Pevensie children

Aslan is the Great Lion who is the tritagonist of the Chronicles of Narnia film series. He is the Primordial Creator and True King of Narnia, a parallel world full of magic, he created as a replica of his own home, known to the Narnians' as Aslan's Country; a mysterious and peaceful world similar to the afterlife, the spirit world or Heaven itself.

It is revealed he had been kept at bay by the White Witch, who had taken over Narnia and cursed it into an eternal winter without Christmas, and that only two sons of Adam and two daughters of Eve could defeat the Witch and restore peace and harmony to Narnia.

When the witch's power began to weaken, Aslan was finally able to return, and tasked a fox with gathering troops for the upcoming war against the witch and her evil forces. It wasn't long before the Pevensies, minus Edmund, had come to Aslan's camp where they met and bowed respectfully before the majestic lion.

Aslan had a private talk with Peter, giving him encouragement and advice, when they heard the call of Susan's horn, alerting them that the girls were in danger by Maugrim, who met his end by Peter's sword, a brave act for which he was awarded by Aslan with knighthood, naming him Sir Peter Wolfs-bane.

He sent some soldiers to follow Maugrim's lieutenant to recover Edmund from the Witch's capture and when they succeeded, Aslan had a talk with Edmund about his past offenses, making the boy see the error of his selfish ways, especially after Edmund had seen the consequences his actions had on others.

However, the Witch came to Aslan's Camp, demanding Edmund's life per the law of Narnia stating every traitor's life belonged to her in accordance to the Deep Magic on which Narnia was built, threatening unless she had blood as the law demanded, all of Narnia would perish in fire and water, going so far as to announce that Edmund will die on the Stone Table per tradition and Aslan can't deny her that right.

Aslan and Jadis shared a private word in his tent. When they emerged, he announced the Witch had renounced her claim on Edmund's life, but unknown to everyone, at a terrible cost. When Jadis questioned if Aslan would keep his word, a ferocious roar from Aslan quickly shut Jadis up, much to the amusement of Aslan's troops.

Aslan snuck out of the camp, but was followed by Susan and Lucy, whom he allowed to accompany him for a while but told them to go back before it was revealed that Aslan had willingly traded his life for Edmund's and had come to the Stone Table to be willingly sacrificed by the White Witch to satisfy both her and the Deep Magic.

As he approached, Aslan was jeered and mocked by the Witch's forces, knocked down by the Minotaur Otmin, the General of the Witch's army, and had his mane shaved to further humiliate him before he was tied and dragged onto the table where Jadis bent down to mock him, letting him know his sacrifice would be in vain as, come morning, she would attack and annihilate Edmund, Peter, and all of Aslan's loyal troops to secure her reign for good before scoffing as she then stated, "So much for love..."

As he lay on the table, moments before his death, Aslan saw that Lucy and Susan had not left before they bore witness to his "death" by the Witch's hand as she plunged her Stone Knife into Aslan and slayed him.

After the White Witch and her army left for battle, Lucy and Susan approached the lifeless body of Aslan and cried into his fur as mice chewed off the ropes binding him. The news of Aslan's death was delivered to Peter and Edmund by a Dryad, convincing them to go to war.

In the morning, Susan and Lucy sadly decided to leave, but felt the Stone Table crack and gasped to see Aslan's body gone. But as the sun rose, they saw so that Aslan had risen from the dead. They embraced the lion who explained that there was Deeper Magic, that when a willing victim who had committed no treachery is killed in the traitor's stead, the Stone Table would crack, and even death itself would be reversed. Susan and Lucy urge Aslan they must help Peter and the others, and Aslan tells them to get on his back before he lets out a mighty roar. With the two sisters on his back, Aslan ran all the way to the Witch's castle, empty of all but the Witch's poor victims who'd been turned to stone, including Lucy's friend, Mr. Tumnus the faun, whom Aslan brings back to life by breathing on him, and proceeds to do so with the rest of the petrified victims to be rallied as reinforcements.

He leads them all to the Battle of Beruna, turning the tide against Jadis and her forces, and Aslan charges into the fray and finds the Witch about to kill Peter. He makes it in time, saving Peter's life as he pounces on the Witch, who barely has time to look up and see him before he lunges at her. They stare into each other's eyes for a moment before Aslan mauls her to death, proclaiming to Peter, "It is finished."

At the great castle, Cair Paravel, Aslan oversees the Pevensies' coronation, proclaiming them all Kings and Queens of Narnia, before he vanishes. Though Lucy was sad to see him go, Mr. Tumnus promises her they'll see him again, that one day he will be there and the next day he won't; as he was not a tame lion.

In the second movie, Lucy claims to have seen Aslan twice, and that he intended for her and the others to follow him. He later appears in a dream of Lucy's and explained that things do not happen the same way twice, which explained why he did not make himself known to anyone but her. When Lucy was later sent off on her own, Aslan himself finally appeared before her and chased away the Telmarines that were attacking her. After they disappeared, Aslan and Lucy shared a fond embrace.

He accompanied her to where the final showdown between Peter, Susan, Edmund, Caspian, and the evil Sopespian was taking place near the vast sea after Sopespian killed King Miraz and framed Caspian, the Pevensies, and Aslan's loyal forces for it. When the soldiers came toward him, Aslan let out a great and mighty roar that conjured up a massive, human-like sea creature that made short work of Sopespian and his entire army, resulting in the Telmarines surrendering after having lost their entire chain of command. With the battle finally over, he ordered that all royals rise, including Caspian. He assured the young prince that he was indeed ready and that Narnia would accept him as their king. Near an ancient tree, Aslan promised the surviving Telmarines that, if they chose, he could send them to the real world to make a new start, or live on in peace with the rest of the Narnians. After talking privately with Peter and Susan, he confessed that they had already learned enough while being in Narnia and that they will not be returning. He opens the portal for Lucy and the others go back to where they came from in the London Underground train station.

Aslan appeared where Eustace was, who was magically transformed into a bronze dragon. Utilizing the incredible healing power of his mighty and powerful roar, he reversed the transformation, restoring the boy to his original human form. Later, he expressed his gratitude in how far Edmund and Lucy had come in their adventures. The mouse, Reepicheep, was honored to be in the presence of Aslan himself, and that he would be glad to go see his, Aslan's, country for himself. Aslan agreed, and opened a path in the sea's waters to where Reepicheep departed for the other side of the world. Aslan then turned to Lucy, who came to realize that this was her and Edmund's last time in Narnia; to which the great lion admits is true, as she and her brother have grown up; just like Susan and Peter. He assured a saddened Lucy that he had another name in the real world; and that he would always be with them, no matter where he was. Aslan tells Eustace that he will return when Narnia will need him. 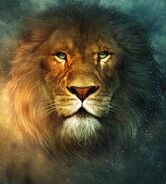 Retrieved from "https://disney.fandom.com/wiki/Aslan?oldid=4421381"
Community content is available under CC-BY-SA unless otherwise noted.