Playing sports, being the best she can be

Positive Wish Energy, Quarrelite power crystal
Astra is one of the twelve Star Darling students at Starling Academy and also one of the supporting characters and protagonists in Disney's Star Darlings.

Astra reaches for the stars in everything she does. She’s strong and unstoppable. Astra has mastered practically every sport and is Starling Academy’s most stellar star ball player! Astra is super confident when it comes to her physical strengths, but shies away from her emotions.

Astra has a very fiery personality; known popularly as "Lava", she is one incendiary girl. She is a competitive girl with a streak of overconfidence, and is also known as the "girl of the lance".

Astra’s theme color is red. She is a teenage girl with fair skin, red eyes, lips, and hair held into a high ponytail. Her outfit consists of a red jacket trimmed with yellow and rolled up sleeves, a red dress underneath with the word, “star”, white socks, and red sneakers. Her accessories are her star-charmed wristbands.

On Earth, Astra’s appearance changes to look like a normal human. Her hair color changes to amber-brown with only a streak of red. Her skin loses its sparkle and her outfit changes to look more human. The only item that remains is her star-charmed wristbands. 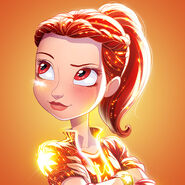 Retrieved from "https://disney.fandom.com/wiki/Astra?oldid=4322605"
Community content is available under CC-BY-SA unless otherwise noted.