Disneyland
"At Home with Donald Duck"

"At Home with Donald Duck" (retitled "Happy Birthday, Donald" in syndication) is an animated episode of Disneyland.

It's Donald Duck's birthday and his nephews decide to buy their uncle a box of cigars. Donald gets suspicious of his nephews' secrecy, and when he sees them exiting the tobacco store, he is convinced that they've taken up smoking. Enraged, he bursts into their treehouse and forces them to smoke the entire box. However, when Donald discovers his birthday card inside the box, he feels so guilty that he literally shrinks with shame. Afterwards, Donald receives a visit from his hipster-sounding conscience, who tells him that "even a worm can turn" and convinces him to throw the boys a party - on his birthday.

Donald invites the boys in for their party, and his idea of celebrating involves watching some of his cartoons, but he reluctantly shows Mickey and the Seal instead when his nephews play onto his conscience. After it's over, the boys now want to watch a Goofy cartoon, but Donald refuses, insisting that it's his turn now. His conscience then convinces him to have a coin-flip bet with the boys, but Donald tries to cheat by using a coin with heads on both sides. The conscience alerts the boys, so they stage a trick so that Donald runs after it along the street while they watch Foul Hunting themselves.

The clock then strikes 5:00, meaning it's time for The Mickey Mouse Club, so the boys put on their Mouseketeer hats and turn on their television to watch the show. Meanwhile, Donald finally catches his coin and walks inside to see the boys watching TV, so he discreetly unplugs the set and tells the boys it's "busted". Faced with the prospect of watching their uncle's cartoons over and over again, the conscience advises the boys to prank their uncle by getting his film reel to roll into the street so he'll chase after it, giving the boys a chance to watch Pluto's Blue Note.

When Donald returns to get the projector ready once more, the conscience reveals Donald's "busted" prank to the boys, and they retaliate by telling him to create a bigger projector picture by stepping far back outside and then locking him out. After being tricked, Donald gets his revenge by going to the TV station and hijacking the "Mousekartoon" portion of The Mickey Mouse Club to present his cartoon, Sea Salts. 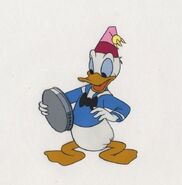 Add a photo to this gallery
Retrieved from "https://disney.fandom.com/wiki/At_Home_with_Donald_Duck?oldid=4169031"
Community content is available under CC-BY-SA unless otherwise noted.