Atka is a man that lives in a neighboring village to Nita's. He appears as the (temporary) main antagonist of Disney's 2006 animated feature film, Brother Bear 2, sequel to the 2003 film. He was voiced by Jeff Bennett.

Atka is a very strong warrior Nita was supposed to marry. However, the Great Spirits interrupted the wedding ceremony, not wanting Nita to marry him because she was matched up to Kenai.

Nita then went on a journey to Honkani Falls to burn an amulet that was given to her by Kenai so she can marry Atka. After her task was done, she returns to her village, but was hesitant in carrying out the wedding ceremony. After Koda sneaks into the village in order to get Nita's attention, Atka is one of the warriors chasing him down. In the film's climax, Atka nearly hurts Kenai, by pushing him off a cliff into shallow water below, and Nita yells at Atka for hurting Kenai as she runs to the bear's side, leaving Atka confused and remorseful over his actions. Later, as he reformed, Atka watches Nita turn into a bear by the Great Spirits of Sitka and Koda's mother. 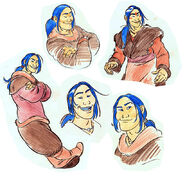