2007-present
Atticus Ronald Shaffer is an American actor and voice actor, who is best known for his television role as Brick Heck in the ABC sitcom The Middle from 2009 to 2018.

For Disney, he voiced Albert Glass in the Disney Channel animated series Fish Hooks, Eddie Nova, Jr. in the I'm in the Band episode "Camp Weasel Rock", Edgar in the 2012 animated feature film, Frankenweenie, and played Zane in the Shake It Up episode "Beam It Up". He also voiced Ono in the Disney Junior animated series, The Lion Guard, Dennis in the Star vs. the Forces of Evil episodes "Face the Music", "Ludo, Where Art Thou?", and "Princess Quasar Caterpillar and the Magic Bell", and Dembe in the 2019 remake of The Lion King.

Dennis
(Star vs. the Forces of Evil) 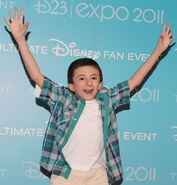 Atticus Shaffer speaks during the ABC portion of the Winter 2013 TCA Tour.
Polski
Community content is available under CC-BY-SA unless otherwise noted.
Advertisement