“No more of this confusing life, afterlife, afterdeath nonsense! I'm afraid from now on, it's just death, death, and more death! Bwahahaha!”
―Thorn, explaining his plot

Atticus Thorn is the primary antagonist of the 2003 video game The Haunted Mansion which is based on the Disneyland ride attraction and the movie of the same name. He is the leader of an evil secret society known only as the Order of Shadows, an ancient cult obsessed with destroying all that is good and just in the world.

The Grand Master of the Order of Shadows, Atticus Thorn survived for centuries beyond his natural life by devouring the very souls he bent to his will. Over time, he grew stronger and amassed numerous cultists and evil spirits to aid him in his conquest of destroying the afterlife. The one way he could do so was obtain the Beacon of Souls, which the Brotherhood of the Soul always hid just beyond Thorn's grasp. During this time, Thorn had taken extreme steps to replenish the Order into a legion like no other.

After ages of searching, Thorn's scouts had tracked the Beacon's whereabouts to a manor located in the bayous of Louisiana. The remaining members of the Brotherhood had been using the manor as their headquarters, and had erected an aura to ward off the forces of evil. Of course, the protection wouldn't last for long, and Thorn managed to overcome the aura. Thorn attempted to turn Madame Leota, the local medium, to his side, but the Brotherhood managed to rescue her from the Order's clutches. In retaliation, Thorn snuffed out the lives of the Brotherhood members and imprisoned Leota within her own crystal ball.

With the Brotherhood members out of the picture, Thorn corrupted the ghostly inhabitants of the mansion, turning them into prisoners bound to serve his will. In a final attempt to thwart Thorn from spreading his evil, Leota had scattered the sacred Soul Gems (which empowered the Beacon) to the far corners of the mansion. Five of these were secured by friendly ghosts, while the sixth was left with the Beacon to leave it functioning (though rather weakly). But this didn't stop Thorn, and still, he sought to claim the Beacon, along with the 999 souls.

In the year 1879, Thorn had learned of the arrival of Zeke Holloway, a young aspiring man who had come to the mansion in search of employment. Thorn now faced a new obstacle in his path, and directed his malevolent servants against Zeke to take the young man out of the picture. Thorn even appeared several times to take on Zeke himself, and each time Thorn had become stronger and more powerful than before.

After using the Seaman's Ring to open a locked passageway in the foyer, Zeke and Leota met up with Thorn in the Vault of Shadows. Thorn, revealing his true ambitions, used his powers to steal the Beacon from Zeke. After absorbing the powers of the captured souls, Thorn took on the appearance of a monstrous, worm-like being and declared that his conquest had now begun. Even then, Zeke tried to use the Beacon, but the artifact was too weak without a crystal core. Zeke resorted to using Leota herself to power the Beacon, and Thorn now sought to remove the living obstacle that stood before him. After being defeated once, Thorn tore apart the floor with his massive tendrils, sending Zeke down into a massive lava pit beneath the Vault. In the end, Thorn was vanquished and sank into the lava, and with the death of the Grand Master came the end of the Order of Shadows. 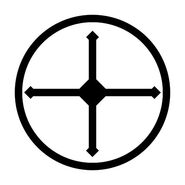 The insignia of the Order of Shadows.