For Disney, she made appearances on Disney XD's Kickin' It as Gracie Bell and Disney Channel's Austin & Ally as Megan Simms. 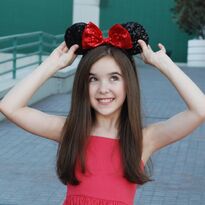