Disney Wiki
Register
Don't have an account?
Sign In
Advertisement
in: Characters, Live-action characters, Agents of S.H.I.E.L.D. characters,
and 6 more

This article is about the character Audrey from Agents of S.H.I.E.L.D.. For other characters, see Audrey (disambiguation).

The Avengers (mentioned only)

Blackout
Audrey Nathan is a character from Agents of S.H.I.E.L.D. only appearing in the episode "The Only Light in the Darkness". She is a cellist from Portland, Oregon, who has a close connection to Phil Coulson. She is portrayed by Amy Acker.

Audrey and Coulson had known each other for a long time prior to the Battle of New York, and had assumedly been dating. During this time, she came across Marcus Daniels, also called Blackout, who immediately fell in love with her due to his love of music. When he made a move, he was apprehended by Coulson.

When Coulson had "died" at the hands of Loki Laufeyson, Audrey had apparently cried for 10 days after hearing the news. After S.H.I.E.L.D. fell due to HYDRA, Daniels escaped and began to track down Audrey. Coulson and his team tracked her down first before Blackout cornered her. Jemma Simmons, not revealing that Coulson was alive, explained that she needed to be used as bait to capture Blackout, to which she hesitantly agreed to.

The trap was set up on a stage, and she began playing the cello alone, with the team watching her. Daniels entered the seating area, and at first listened, he then realized that she was helping S.H.I.E.L.D., he began to drain her life, but Coulson intervened and she fell to the stage unconscious. She began to wake up as Coulson left, still imagining he was her guardian angel, and yet oblivious to the fact he was alive. 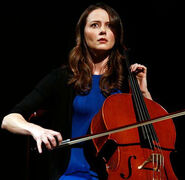 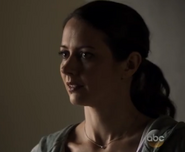