Your Friend the Rat (cameo)

Alfredo Linguini (son)
Auguste Gusteau is a major character in Disney•Pixar's 2007 animated feature film, Ratatouille. He was an acclaimed chef and the owner of Gusteau's, a five-star restaurant in Paris, France. After losing one of his stars to a scathing review by food critic Anton Ego, Gusteau died of a broken heart. An imaginary version of the chef endured in the mind of Remy, an aspiring rat chef for whom Gusteau was an inspiration.

He is a renowned and extremely talented chef who wrote the bestseller Anyone Can Cook and founded the restaurant Gusteau's, which merited five stars. His personal motto is that "anyone can cook", and is prone to producing recipes with unusual flairs. He was the youngest chef in history to obtain a 5-star restaurant, and was among one of the finest chefs worldwide.

After France's top food critic Anton Ego gave his restaurant an insulting review which led to the loss of one star rating from the restaurant, the review broke Gusteau's heart and he died shortly afterwards, which, according to tradition, resulted in the loss of another rating, meriting the restaurant three stars. Gusteau's ownership of the restaurant was handed over to his sous chef Skinner, who was not exactly faithful to his boss's ideals. He later appears as Remy's guide, leading him to Gusteau's.

It is later revealed that Alfredo Linguini is really the son of Gusteau. He is the son of Renata Linguini, with whom Gusteau once shared a romantic relationship. Linguini later acquires the restaurant after Remy informs him of this discovery and the demeaning cheap frozen food line Skinner had, that was exploiting the late Chef's likeness was halted.

Unfortunately, Skinner tries to sabotage Linguini's attempts to please returning customer Anton Ego by kidnapping Remy. Remy talks to Gusteau in his cage and is frustrated because he feels that all this time he has been pretending to be things he is not, like a rat for his dad and a human for Linguini, and that he (Gusteau) is really there for him to talk to. In his final appearance to Remy, Gusteau tells Remy that he doesn't need to pretend, and that he never did. He was being his true self the whole time. Uplifted by these words, Remy is freed and rushes to Linguini's aid, and the two succeed in impressing Ego and start a new partnership in which they remain respected chefs.

Gusteau does not appear again after Remy's kidnapping. Despite the eventual closing of his restaurant, however, his legacy lives on in Linguini and Remy, as they continue to cook astounding meals in a new restaurant appropriately named La Ratatouille. 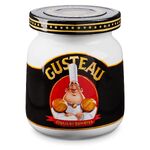